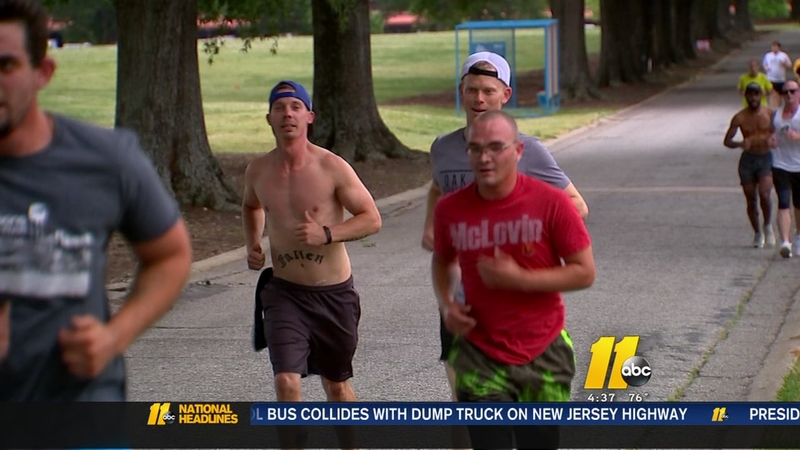 Raleigh run club a path to recovery for addicts

The Oak City Recovery Run Club is hoping to lower that number - and in the process is providing a path to changing lives.

Justin Garrity went through the recovery program at Healing Transitions, a free homeless shelter in Raleigh, and with the help of a friend, Matt Elliott, created the run club.

"I was living out of my car in the Walmart parking lot because of my addiction to heroin," Garrity said. "I started running. I started running almost every single day I was in the program."

Coming up on #ABC11 I’ll introduce you to @OakCityRRC a club urging both people struggling with addiction and those who aren’t to come out and hit the pavement. P.S. I couldn’t keep up 🤣🤣 @healtransitions @ABC11_WTVD pic.twitter.com/Y2agmhnyFE

The goal of the run club was to help those in the recovery process attain achievable goals.

"For those first three months, it was like three people out there; it was hardly anyone," he said. "We gradually seen numbers increase. It's an ebb and flow. I think people have really enjoyed having that goal-oriented exercise."

"It got me signed up for my first 10K, the Turkey Trot on Thanksgiving," Richardson said. "That's something I always wanted to do, and I did it and I loved it."

"A lot of times we get here, and we don't have anything and so we want to provide folks with that running gear," said Garrity. "Another thing we want to do is register people for races so we select one race a month that we can register our run club participants for.

"I did not ever foresee that in active addiction. I never thought I would make it this far when I'm using drugs," Garrity added. "I thought I wasn't going to make it past 25 and now I'm 30 years old."

"There's been numerous times I wanted to leave here and guys in the run club have stopped me," Richardson said. "I just wanted to throw in the towel and give up. They said 'look dude that's not an option, like we see something in you and that is just not an option.' I couldn't thank them guys enough. They've really saved my life."

The club meets every Tuesday night at 6 p.m. outside of Healing Transitions in Raleigh. The members encourage those struggling with addiction - and those who aren't - to come out and run.
Report a correction or typo
Related topics:
sportsraleighwake countyroad to recoveryrunningaddictionbuzzworthywake county newsraleigh newsfeel good
Copyright © 2021 WTVD-TV. All Rights Reserved.
More Videos
From CNN Newsource affiliates
TOP STORIES