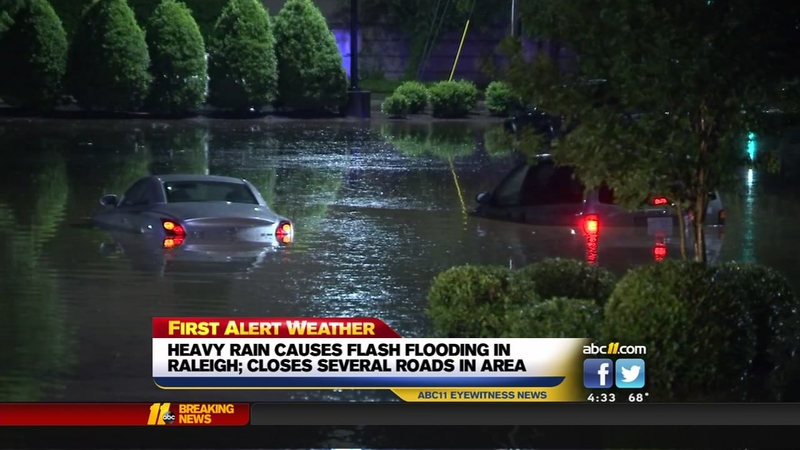 RALEIGH (WTVD) -- Parts of Raleigh are drying out after flash flooding hit the area Monday evening.

Newton Road near Six Forks Road became impassable after a sinkhole developed in the street. Police closed down the road indefinitely.

The sinkhole is about 25-feet wide and grew even larger Tuesday morning.

JoeMary Rodriguez was lucky to have running water at her salon right next to the sinkhole. However, because the road is closed, clients are assuming there's no way for them to get there.

The washout caused a water-main break, which resulted in nearby residents being left without running water.

Portions of Glenwood Avenue were closed as the rain thrashed the area.

Crews responded to a vehicle underwater near Crabtree Valley Mall.

Officials said it was not a creek-related issue.

Several vehicles were submerged in the parking lot and deck near the Sears.

No injuries were reported.
Mall officials said there is no water inside the mall itself.

“I don’t normally like going fishing when I tow cars!” — Tow truck drivers to the rescue after the floods near Crabtree Valley Mall. It’s too late for many of them. #abc11 pic.twitter.com/Ng3pxD7ajp

Raleigh officials closed the intersection at Millbrook Road and Six Forks Road.
An ABC11 crew at the scene said Crabtree Creek has overflowed where it parallels North Hills Drive.

North Hills Drive has since reopened.

Other areas where roads were closed include: