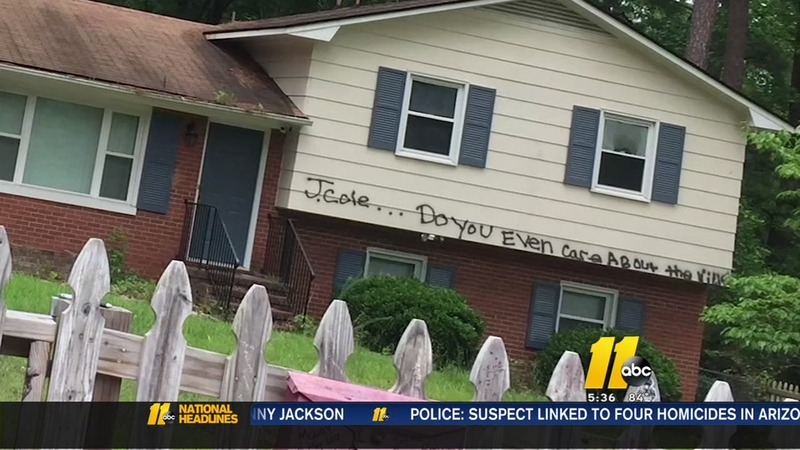 Those were words marred on award-winning rapper J.Cole's childhood home.

J.Cole is a native of Fayetteville.

The photo posted to Facebook surfaced over the weekend but by Monday morning, the black spray paint had been painted over.

MORE TOP STORIES:
Miss America makeover: Organization scraps swimsuit, evening gown competitions in wake of #MeToo movement
Woman who appeared on HGTV finds out she has cancer after a doctor watching spots a lump on her throat

J. Cole's team would not confirm when the vandalism happened and Fayetteville police say the incident was not reported to them.

The photo has been shared more than 300 times, with Facebook users arguing the rapper's involvement in his hometown. The irony of the phrase? Well, it was scribbled across the home that Cole planned to turn into a rent-free home for single mothers and their families.

ABC11 first reported on the plans back in 2015.
"My goal is to have that be a haven for a family," Cole told New York's Combat Jack internet radio show. "So every two years, a new family will come in and live rent-free. The idea is that it's a single mother with multiple kids. I want her kids to feel how I felt when we got the house."

Jermaine Cole, 30, was born into a military family.

When he was a toddler, his parents divorced, and his mother had to move him and his older brother out of post housing and into a Spring Lake trailer park. Soon, his mother would re-marry another soldier, and the family moved into the 1,600 square foot home on Forest Hills Drive. Cole told the podcast host that it felt like a "mansion," where he had his own room and space to dream big.

Years later, the relationship between Cole's parents would fizzle, and his mother lost the home to foreclosure. In light of his success, Cole was able to purchase the house.

The home was Cole's third album's namesake, and the album cover features Cole atop the roof gazing into the distance.