Durham ponders what to do with Confederate monuments 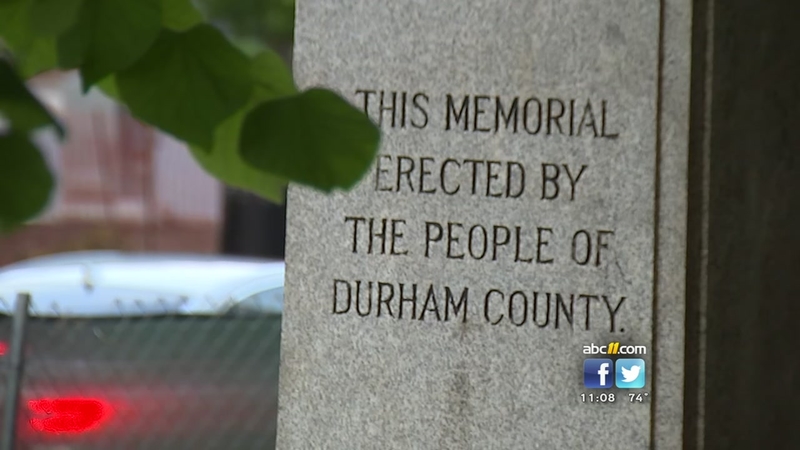 DURHAM, NC (WTVD) -- Durham County's Confederate statue was yanked down off its pedestal at the old courthouse by demonstrators who believe it to be a symbol of hate of the nation's slave-holding past.

Thursday night, the city-county committee tasked with deciding what to do with the Confederate monuments that remain on Durham public properties heard expert testimony from UNC-Chapel Hill history professor Fitzhugh Brundage, who has studied the all of the state's monuments and memorials.

"Prior to the Civil War there were almost no monuments in this state," Brundage said in his accounting of the state's monuments.

The contentious confederate monuments at the old Durham County Courthouse are now locked away behind a chain link fence.
Tonight, another chance for the public to sound off on what to do with them next. #abc11 pic.twitter.com/CqBAyKABLb

"Typically, (people who erect monuments) want the monument to represent one thing. They would like to sort of fix it on the landscape for perpetuity," he said. "And we can understand all the motivations why they would want to do that. But, we also know that it's going to change."

Committee members are tasked with cataloging every Confederate monument and symbol in the city and county by next October; then make a recommendation on what to do with all of them.

Barry Archer, an African-American man who addressed the panel proudly wearing a "Bull City" T-shirt and Durham ball cap, argued that city and county monuments need to be a place people feel safe.

"If we're going to have monuments, we need them to be very inclusive," Archer said. "We need them not to send dissonance into our society which is what several monuments can do."