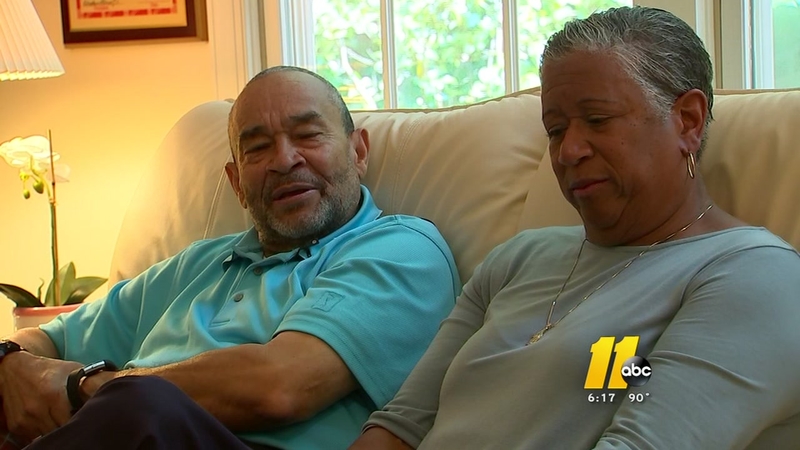 CHAPEL HILL, N.C. (WTVD) -- When Fred and Sylvia Black got married at Duke University Chapel 50 years ago, they didn't realize how monumental it would be.

On June 10 1968, they became the first African-American couple married there. They're now living in Chapel Hill.

Fred and Sylvia were students at Howard University at the height of the Civil Rights Movement.

That school closed temporarily after the assassination of Martin Luther King, Jr. and the unrest that followed.

"The first thing on our mind was Washington was burning," Fred Black said. "We were at Howard University in Washington and they weren't going to assume responsibility for you. So you had to go home and my gosh, we're thinking wait a minute we've got a wedding scheduled on the tenth of June."

The Blacks had to figure out where to get married. Sylvia is from Durham and her mom knew the dean of Duke Chapel. Thus, they were able to arrange a wedding there.

They married days after their graduation and the assassination of Robert Kennedy.

About a thousand people went to their wedding. Some were people they didn't even know and they just went to experience history, Fred Black noted.

50 years later, the couple says there's been some progress when it comes to race relations but they say more is needed now.

"If you remember in '68,'69,'70, there was a mass movement toward change and I don't feel that same mass movement unfortunately," Sylvia Black said.

Fred Black was stationed at Fort Bragg and served in Korea and Vietnam.

Sylvia earned her doctorate and taught at UNC.

They have two children, who both graduated from college.

So what's the secret to their 50-year marriage?

"No matter how angry you might get about something you figure you've got to work it out," Fred Black said. "You're not walking away from it. Plus, dividing all the stuff would just be time consuming," he said laughing.

The couple plans to celebrate their golden anniversary with a nice dinner and a trip to Europe at the end of month.