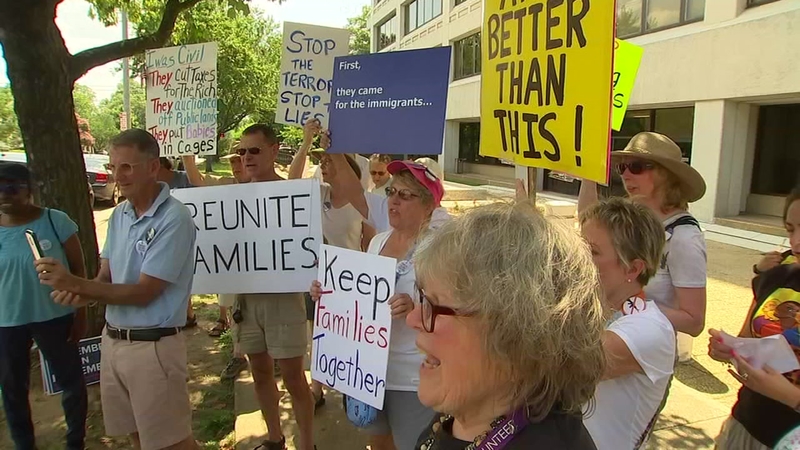 RALEIGH (WTVD) -- The weekly Tuesdays with Tillis demonstrations continue at the Federal Building in Raleigh where Senator Tillis' office resides.

Some of the signs held by demonstrators outside the Federal building where @SenThomTillis has an office in Raleigh. They oppose the immigration policies of @realDonaldTrump . More on the story, with a response from Tillis, today on #abc11 pic.twitter.com/w85GllPhbW

Protestors told ABC11 that the clothing represents the children separated from their detained parents who attempted to enter this country without documentation.

Sheila Arias of Mom's Rising brought her children to the demonstration. "This is serious! You know, our kids are the future," she said. "This is supposed to be the American dream for many of us, and this is not a dream. This is a nightmare now!"
The protesters spoke against the Trump Administration's zero tolerance policy for immigrants detained when they try to cross the US-Mexico border illegally.

Senator Tillis' staff emailed this response to the latest demonstration from his office in Washington D.C.:

Senator Tillis authored and introduced a bill ending family separation and ensuring any separated families will be reunited. The bill has 37 co-sponsors, including the Senate Majority Leader, who controls what legislation is brought to the Senate floor.

Senator Tillis is also one of four senators leading bipartisan negotiations on the path forward; they had their first meeting last week.

Tillis said he is willing to work with Democrats to address their concerns about long-term detentions.

"The concern from Democrats is, 'Well, you're going to keep them in detention forever.' Well, why don't we sit down and figure out how do we address those concerns? I'm open to it," Tillis said.

The Keep Families Together and Enforce the Law Act includes provisions to ensure the humane and fair treatment of migrant children and families by setting mandatory standards of care for family residential centers. Families will be ensured access to suitable living accommodations, food and water, medical assistance, and any other service necessary for their care.

In addition to keeping children and their parents together, the legislation also keeps children safe by requiring children to be removed from an individual who presents a clear and present danger to the health and safety of the child including: situations in which DHS cannot verify an individual is the parent of the child; a parent with a violent history of committing aggravated felonies; a child who is a victim of sexual or domestic abuse; a child who is a victim of trafficking.

To prioritize the timely adjudication of family cases, the legislation authorizes 225 new immigration judges and requires the Secretary of Homeland Security and the Attorney General to prioritize resolving the cases of children and families in family residential centers.

Unlike other proposals-which incentivize illegal immigration by codifying "catch and release" policies into law-this legislation actually solves the problem by keeping families together while also ensuring the integrity of our immigration laws.

"Migrant children should not be separated from their families, and both sides of the aisle can agree that we must quickly and permanently address this problem. Our legislation provides the solution by clarifying federal law to ensure that families will remain together and receive good care as they go through the legal process," said Senator Tillis."I look forward to working with my colleagues in the coming days and codifying this fair and commonsense solution into law."
Report a correction or typo
Related topics:
politicsraleighdonald trumpimmigration
Copyright © 2021 WTVD-TV. All Rights Reserved.
More Videos
From CNN Newsource affiliates
TOP STORIES