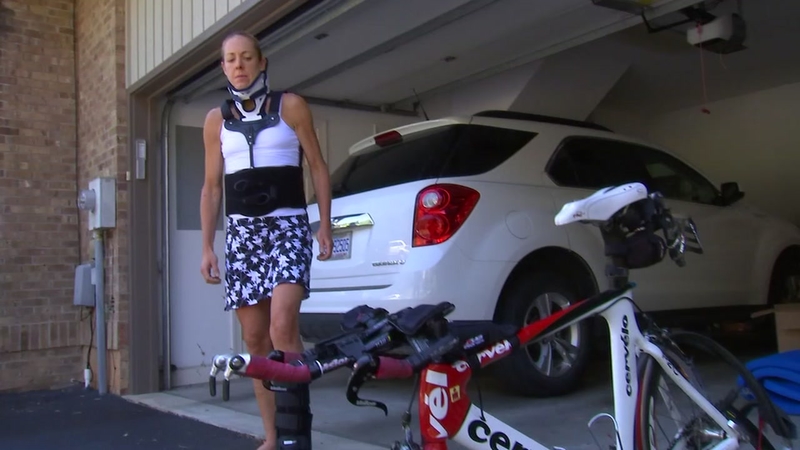 DURHAM, NC (WTVD) -- The day after she was released from Duke Hospital, Georgia Alexander looks just as banged up as her carbon road bike.

The 40-year-old single mom from Durham, who competes in Ironman races all over the world, is in braces from head to toe with a fractured neck and back, three fractured ribs and fractured left fibula.

Alexander was training for the Ironman with an 80-mile ride on rural roads in Durham on Saturday morning where she thought she'd be safe.

WItness' called 911 and found Alexander's road ID attached to her mangled bike so they called her emergency contact- her mother Priscilla Russell.

Alexander wants all cyclists to be prepared for the worst with a road ID, but also for drivers to pay attention, even on the quiet, country roads.

"They take it for granted- there's not gonna be anybody out here," she said. "Well, I was."

Alexander, a single mother and full-time neuroscientist, will be in braces for the next three months, and hoping her bones will heal.

She used a lot of her races to raise money for foundations she's passionate about. Alexander said perhaps that will be the hardest part of ending her racing career for the foreseeable future.

Deputies charged the driver who hit her with failure to reduce speed to avoid a collision with another vehicle.
Report a correction or typo
Related topics:
durhamcar crashcrimebikes
Copyright © 2021 WTVD-TV. All Rights Reserved.
More Videos
From CNN Newsource affiliates
TOP STORIES