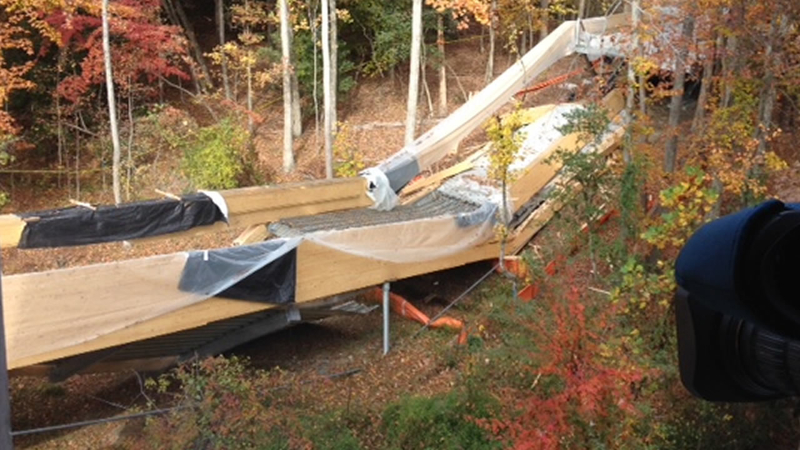 RALEIGH (WTVD) -- It was a very bad case of deja vu in northeast Raleigh Friday after a second pedestrian bridge at Wake Tech North collapsed.

The good news is that it collapsed during the overnight hours. Just hours before, a similar pedestrian bridge gave way while construction crews were working on it. One person was killed and four others were injured.

The man who died was hired for day-work by Jo Concrete Services along with the four other men who were hurt in Thursday's collapse.

That company and three others are now under the state's microscope as investigators figure out how the bridge collapse could happen twice.

Jones' Skanska construction company is the general contractor for the two bridge projects. He said execs didn't get word of the second collapse until 8:30a.m. Friday.

The ABC11 I-Team has learned the man who was killed was hired for day work by JO Concrete, which is based in Raleigh, along with the four others injured who were his friends.

The company's owner says none of the men had any formal training.

According to the state Department of Labor, Jo Concrete was cited for one serious violation in 2006 for not having personal protective equipment on the job.

Jones says his company has brought in its own forensic engineers to piece together what went terribly wrong.

"They'll have to be the ones who will tell us exactly what caused the failure," said Jones.

Two of the injured men are in fair condition at WakeMed. Two are in good condition including Carlos Chavez. We are still waiting to learn the names of the other victims.

Meantime, OSHA says its investigation could take anywhere from 3 to 4 months.