At least 35 dead after cars plunge off collapsed bridge in Italy: Officials 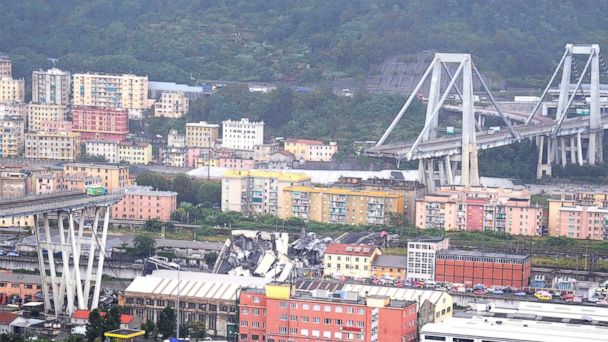 A section of a towering highway bridge collapsed in Italy Tuesday, sending vehicles plunging nearly 300 feet to the ground and killing at least 35 people, officials said.

The collapse of the Morandi Bridge in Genoa occurred around midday during strong storms moving through the area of northwest Italy, according to authorities.

At least 30 vehicles were on the bridge in a port section of the city when the span gave way, Amalia Tedeschi, a firefighter, told the Italian news agency ANSA. Several people were pulled from the rubble alive and taken to a hospital by helicopter, Tedeschi added.

Construction involving a crane was occurring on the bridge at the time of the collapse, but it was too early to pinpoint what caused the span to fail, Italian authorities said.

At least 35 people were killed, including a child, according to the city of Genoa's civil protection office. Another 16 people were injured -- 12 of them critically -- in the catastrophe, the Interior Ministry said early Wednesday. Five of those who were killed have yet to be identified.

All the casualties appeared to have been in vehicles that plummeted from the bridge, Angelo Borelli, head of Italy's civil protection agency, said during a news conference. He added that the bridge fell on two warehouses but no one is believed to have been inside them because they were closed for the summer holiday.

Borelli said 30 to 35 vehicles, including three heavy trucks, were on the bridge at the time of the collapse.

Italian Prime Minister Giuseppe Conte described the collapse as "an immense tragedy" after he toured the disaster site.

"It is shocking to see the twisted metal and the bridge collapsed with victims who were extracted," Conte told RAI state TV after flying over the collapsed bridge and visiting survivors at a hospital.

He said rescue workers managed to save several people who were in cars that fell nearly 150 feet "and are now alive and in the hospital."

Shortly after Conte spoke publicly about the disaster, Genoa's civil protection office raised the death toll, reporting that two more bodies had been extracted from the bridge rubble late Tuesday and that another victim died during surgery.

Several witnesses posted videos of the collapse on social media. In one video, someone can be heard screaming, "Oh, God" and a flash could be seen as the concrete structure crumbled.

Witness Alessandro Megna told RAI state radio that he had been stuck in a traffic jam under the bridge when the collapse occurred.

"Suddenly the bridge came down with everything it was carrying. It was really an apocalyptic scene. I couldn't believe my eyes," Megna said.

Another witness, Davide Ricci, told reporters at the scene that he was lucky to be alive.

"The debris from the collapse came to within 20 meters [about 20 yards] of my car," said Ricci, who saw the bridge go down while he was driving. "First the central pylon crumbled, then the whole thing came down."

The driver of a box truck slammed on his brakes as the bridge fell apart, stopping just before plummeting off the edge of the broken span, the general manager of the Basko supermarket chain for which he works told reporters.

Hours after the collapse, video showed the truck still perched just feet from where the bridge gave way.

The collapse happened on part of the viaduct on the A10 highway that crosses the Polcevera River, the country's national police, Polizia di Stato, said.

Witnesses said the bridge toppled after it was struck by lightning.

The A10 highway, the main route between northern Italy and France, was closed in both directions as search-and-rescue teams looked for survivors.