H.K. Edgerton, an activist who dresses up in soldier gear to teach people about that time period, drove more than 200 miles from Asheville to Chapel Hill to honor the fallen statue.

"I came because of what those thugs did," said Edgerton, who is president of Southern Heritage 411.

A floral wreath sits beside HK Edgerton, a black man wearing confederate soldier gear/holding battle flag. He says the folks who ripped down @UNC #SilentSam are thugs and should be prosecuted. The 💐 were ordered to respect the fallen #confederate statue. https://t.co/jOxSipwPJh pic.twitter.com/QoYZvtpkxK

ABC11 asked Edgerton why he considered the protesters to be thugs.

"Because of the mob mentality that they use," he replied. "It was an illegal act. Every one of them should be prosecuted. And if there were any students involved, they ought to be expelled from the school permanently.

Edgerton said his great-great uncle was a medical aid in the Civil War, and Silent Sam is a symbol of Southern heritage for him, and for people of all colors whose ancestors served in the war.

'Silent Sam' is gone but conversation continues at UNC-Chapel Hill
The "Silent Sam" statue is gone from the grounds of UNC-Chapel Hill but it's still a big presence in conversations on campus and beyond. Meantime the university has called in the SBI to assist campus police with the investigation.

Opponents say this statue stood for black hate and oppression.

"I'm sick and tired of black folks being used as a weapon of trust against Southern white folks," Edgerton said.

Mark Burnett, a black man from Hillsborough who was visiting UNC on Tuesday, disagreed. 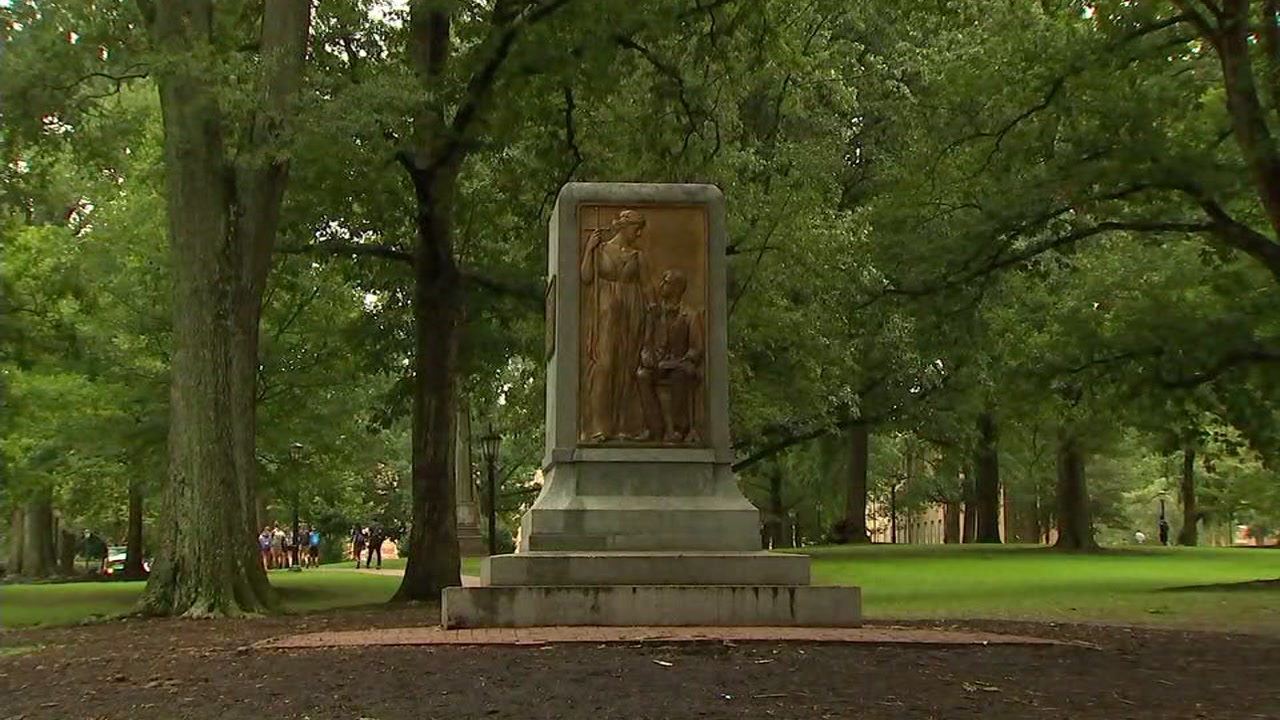 Gov. Cooper, UNC officials speak out after toppling of Confederate statue
Silent Sam is no longer standing tall on The University of North Carolina at Chapel Hill's campus.

"People are going to affiliate themselves with whatever they choose to. That don't make it right," Burnett said.

A criminal investigation is underway by UNC Police and school leaders with no timetable on when formal charges will be filed.

Protesters knock down Silent Sam statue, which had stood on UNC campus since 1913
Using a rope, jubilant protesters brought down the longstanding Confederate statue on the UNC campus Monday evening. The school said it is "investigating the vandalism."

Reaction to the act of vandalism that took down Silent Sam has been varied.

"Where are we going as a country? You can't. We have laws," said Mike Miller, from Wisconsin. "Don't take things into your own hands. And especially destroying property."

Sarah Zelasky, a former UNC student, said, "Something needs to be done and regardless of how I feel about people protesting. I hope this sparks some discussion."

The location of Silent Sam is being kept secret. The school said that is for safety reasons.

"Change takes time," said Seona Yo, a professor of Nursing at UNC. "But it is inevitable."

Groups in support of Silent Sam, such as ACTBAC or Alamance County Taking Back Alamance Country, are planning a rally in protest.