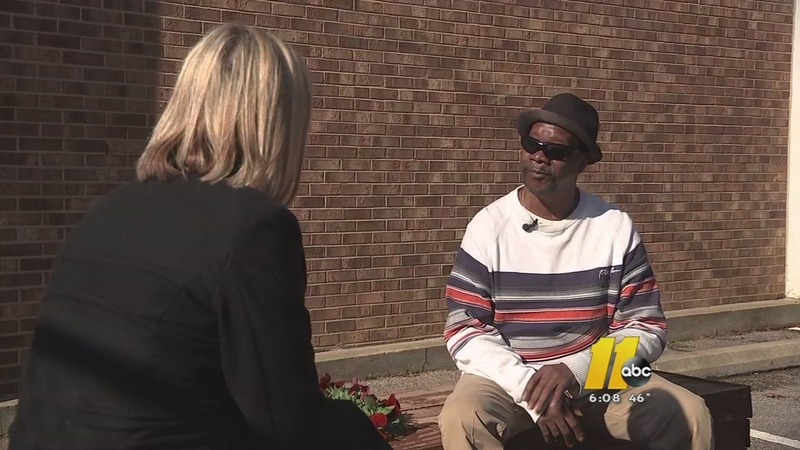 RALEIGH (WTVD) -- Charles Ray lost contact with his family in Fayetteville about 10 years ago. During that time, he suffered a stroke that affected his memory, making it impossible for him to recall their exact whereabouts. And eventually he ended up homeless on the streets of Raleigh. It was that which landed him at the Oak City Outreach Center downtown.

"I came up here to the Outreach Center, and Shameeka, she came to my rescue," he said.

Shameeka Newton is a student intern with Catholic Charities studying to be a social worker. She came to know Charles while working at the center and learned his backstory.

"It started with one question. I said, 'what does happy look like to you?' and he said, basically he wants to see his family. He hasn't seen his family in 10 years and he knows they're worried about him," she recalled.

Charles couldn't remember much about their exact whereabouts, but he did give Shameeka his brother's name, Eugene, from Fayetteville, so she used that to start searching online.

"I went to different websites looking up phone numbers calling different people. They didn't know him, but then I eventually did arrive at a person who did know him, and it was his sister in law. And once she answered the phone, she screamed, she cried, they thought he was dead," she explained.

And when Charles learned about that call?

"Oh, I, I just started crying, I couldn't. You know I did believe her, I did, (because) I never lost faith in her," he said with a smile on his face.

His family quickly made the trip up to Raleigh for a much overdue reunion at the center.

"His nephews came down here and spent the whole day with him here at Oak City Outreach Center. And they still keep in contact, and they're going to spend the holidays together," Shameeka said.

As for what made that reunion possible, that's due in large part to not only Shameeka but the very philosophy they have at the outreach center. Catholic Charities encourages all the volunteers who come in from different faith-based groups to not only provide food but to also offer up fellowship and to take the time to talk to the people who are coming there.

And that simple service of listening and caring, along with the help he received in finding his family, are gifts Charles says he's eternally grateful for.

"They took time. They took time to talk to me. Every time I came down, they made me feel welcome, every time."

Adding to the good news is since that happy reunion Charles also got help getting his disability payments and is no longer homeless.