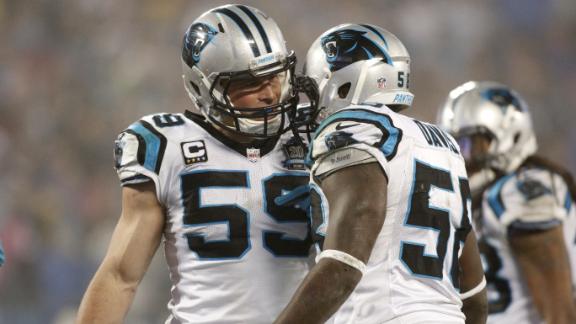 CHARLOTTE, N.C. -- The Arizona Cardinals made history in Saturday's 27-16 wild-card loss to the Carolina Panthers.

Arizona's 78 total yards were the fewest in a postseason game in NFL history, breaking the previous mark set in 1958 by the Cleveland Browns, who had 86 against the New York Giants.

The Cardinals had 65 yards at halftime, lost 3 yards in the third quarter and finished with 16 in the fourth.

The record fell when Arizona began lateraling the ball around the field on the game's final play, losing 19 yards.

"Honestly, it's not good enough and it showed," Cardinals running back Stepfan Taylor said. "That's why we're going home and they're moving on. Can't win like that, especially in the playoffs. It's pretty simple."

Despite Arizona quarterback Ryan Lindley throwing for 82 yards, the Cardinals finished with 51 passing yards because of their last play, which included a series of laterals and backward throws. Their 51 passing yards were the fewest by a team that threw multiple interceptions in a playoff game since 1977, when the Broncos had 26 passing yards and four interceptions.

Panthers linebacker Luke Kuechly, who finished with a pick and 10 tackles, gave credit to punterBrad Nortman for putting the Cardinals in tough spots.

"Any time you can limit a team to less than 100 yards it is a good feeling," Kuechly said. "The thing that makes that so cool is that you look at it and think why did that happen? The first thing was Brad kicked the ball well. He put them inside the 20-yard line multiple times, and the offense controlled the ball. You look at that number and you think it is all defense, but Brad kicked the ball extremely well and the offense held the ball, and any time you can do that and control the field position it makes our job a ton easier."

Lindley's 82 yards were the fifth fewest in a playoff game for a quarterback with at least 25 attempts and the fewest since Dante Culpepper's 78 in 2000, according to the Elias Sports Bureau.

Panthers coach Ron Rivera made sure to acknowledge that when discussing the defensive success.

"I thought we did some good things defensively. We were able to contain them," he said. "We just did the things we needed to do. We caught them at a good time.''

"We weren't able to get the running game going the way we wanted to go," Fitzgerald said. "When you get one dimensional and you have to throw the football and you get behind, it's tough sledding in this league."

Information from ESPN.com Panthers reporter David Newton was used in this report.