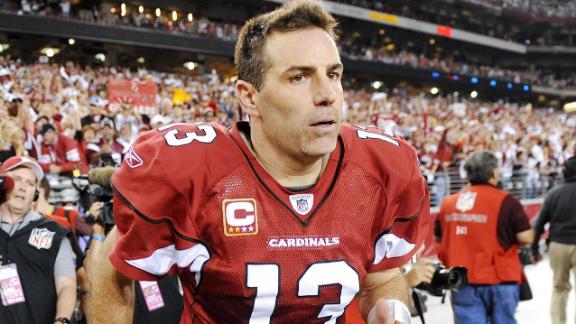 Injuries to their top two quarterbacks forced Arizona to call upon former Cardinal Ryan Lindley for the team's final five games, but had Arizona reached a little bit further back in its franchise's past, it could've coerced a future Hall of Famer to buckle his chin strap again.

Kurt Warner, 43, said he would have seriously thought about a return to the field had the Cardinals come calling.

"I would have considered it," Warner said Thursday on "The Dan Patrick Show." "Physically, I feel really, really good. Now, is that the same as [playing quarterback] in the NFL? No. ... Had they truly reached out and we would've talked about it, I would've considered it."

Warner said that he talked to his family about the possibility of his returning to the NFL but a serious conversation with the Cardinals never took place.

"My biggest concern was screwing it up," Warner said of his hypothetical comeback. "Even if expectations weren't high, they would've been for me. ... If I was the reason they lost, that would've been hard for me to handle."

Arizona lost both Carson Palmer (ACL) and Drew Stanton (knee) to injury, which forced coach Bruce Arians to bring back and start Lindley at quarterback for the team's final four regular-season games and its wild-card loss to the Carolina Panthers.

Lindley, who had not played an NFL down since his rookie season with the Cardinals in 2012, went 1-3 in the stretch and threw a total of just three touchdown passes.

Now an analyst for NFL Network, Warner led the Cardinals to their only Super Bowl appearance in the 2008-09 season and retired after the 2009-10 season. He ended his 12-season NFL career having thrown for 32,344 yards and 208 touchdowns.

On Thursday night, Warner was named one of 18 finalists for the Pro Football Hall of Fame.