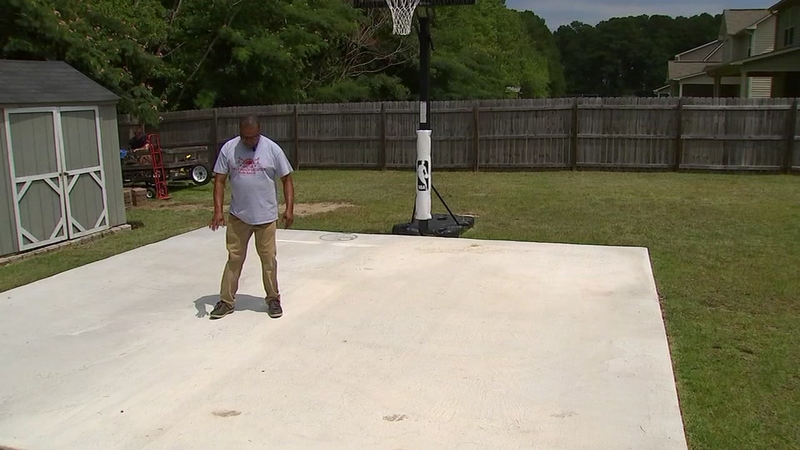 FAYETTEVILLE, N.C. (WTVD) -- Lonnie James wanted to get the perfect gift for his son's birthday.

He decided to purchase a basketball pad right in his backyard so his son, Tyler, could practice shooting hoops whenever he wanted.

Lonnie paid Skillz Curbside Appeal Concrete more than $1,800 to install the court in May.

The job was completed but there were problems."The surface is supposed to be smooth. There are pits here, which are probably going to end up cracking. It's uneven, the whole surface. It's got rocks sticking up," Lonnie said, as he pointed out the different problem areas.

There was also a two-inch ledge between the top of the slab and the grass, which Lonnie said was a safety hazard. "If he comes to the edge he could trip or twist his ankle or anything," Lonnie said, adding that the NAME had already fallen in one spot.

When he spoke to the owner of the concrete company, Kurt Skillings, Lonnie said Skillings assured him it would get taken care of. Months passed, and it didn't happen, so that's when Lonnie go in touch with me.

"I prefer to have a whole new court in the ground like it's supposed to have been the first time," Lonnie said.

It took some time, but eventually, Skillings came back and fixed the job after I got in touch with him. He apologized and admitted that the job was done poorly and agreed to re-do it. He dug up the old court and put in a new, smooth 20x20 court that's flush with the ground, just like Lonnie originally wanted.

"I just want to thank you and the Troubleshooter team for all that you do because this wouldn't have been possible without you," Lonnie said.

Now, his son has no excuse not to get out and perfect the art of shooting hoops, and Lonnie gets to enjoy that quality time with his son without worrying about injuries.
Report a correction or typo
Related topics:
businessfayettevillemoneybusinesstroubleshooter
Copyright © 2021 WTVD-TV. All Rights Reserved.
TROUBLESHOOTER