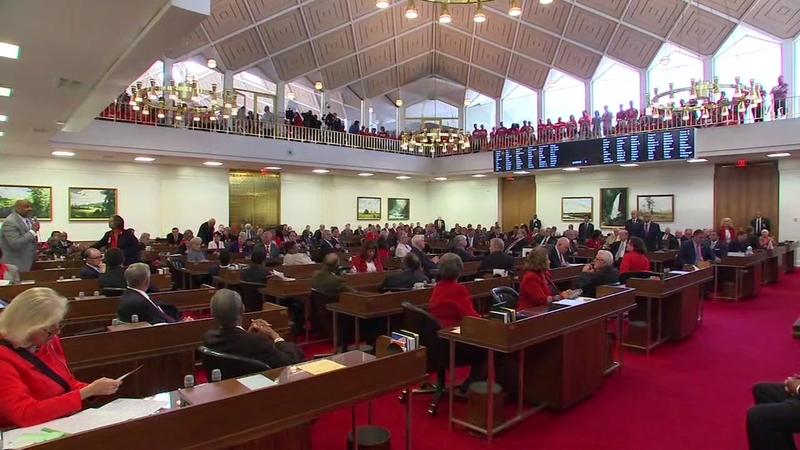 RALEIGH, N.C. (WTVD) -- Both the North Carolina House and Senate convene at noon Tuesday for a lame duck special session and will be greeted by hundreds of protesters demonstrating against the voter photo ID measure added to the state Constitution earlier this month by a majority of voters.

Protesters will make their case that this current body of lawmakers shouldn't be the one deciding on the details of voter ID.

Tuesday marks three weeks since voters gave Democrats enough seats to take away Republicans' power to override Gov. Roy Cooper's vetoes. With just a month left with a super-majority, the GOP is moving full-speed ahead voter ID, one of the party's its biggest priorities.

“There’s no question that the lame duck GOP supermajority is trying to push through a voter ID bill.”

Critics of voter-approved photo ID constitutional amendment blast Republican efforts to write the rules now rather than wait until next session when Dems have more power #abc11 pic.twitter.com/R5oSOFr7b3

Brenner's group is one of several joining the North Carolina NAACP on Tuesday to protest GOP plans to write the new voter ID rules now -- instead of waiting until next year,when Democrats have more power.

"Voters voted for voter ID. They also voted out a GOP supermajority,'' Brenner said. "If we're to follow the will of the voters, we should take up the new voter ID rules with the new legislature."

Top-ranking Republican Sen. Phil Berger pushed back Monday against any talk of a delay.

"We said for a long time that we would be taking this up during the November session," Berger told reporters on a conference call Monday. "I don't think anybody should be surprised by that."

Berger defended the newly-proposed rules as simple and free; multiple forms of ID would be accepted to vote including college IDs, but only for UNC System schools. And, voter IDs would be offered at no charge at any county board of elections office.

“We said for a long time we would be taking up [voter ID] during the November session. I don’t think anybody should be surprised by that.” —

"I think the voters issued a clear mandate for voter ID," he said. "It'll take time to implement it effectively before the next election. So we're moving forward with it as we said we would."

Another constitutional amendment passed by voters this month was 'Marsy's Law' -- a victim's right measure that garnered much more bipartisan support.

When asked if Marsy's Law would get the same priority voter ID was getting, Berger said there were a lot of moving parts and it wouldn't likely come up until sometime next year.
Report a correction or typo
Related topics:
politicsraleighncvoter informationvotinggeneral assemblystate politics
Copyright © 2021 WTVD-TV. All Rights Reserved.
More Videos
From CNN Newsource affiliates
TOP STORIES