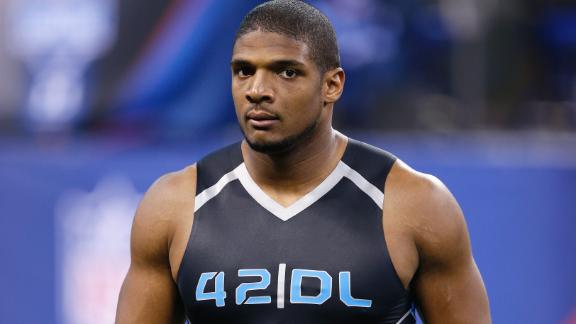 Visa has partnered with Sam, who could become the first active openly gay NFL player.

In his first spot, Sam, the SEC Defensive Player of the Year out of Missouri, is shown working out while a voiceover urges the viewer to judge him for his play on the field, not off of it.

"We felt that Michael's story was a perfect fit for our 'everywhere' campaign, which is meant to inspire people to reach their own personal goals and aspirations," Visa's chief marketing officer Kevin Burke told ESPN.com. "We wish Michael the best on and off the field as he embarks on the next chapter of his life."

Added Cameron Weiss, Sam's agent and attorney: "We've been really selective in trying to find the right partners and we couldn't be more pleased to start with a world-class company like Visa."

Sam, who came out in February, is projected to be selected Saturday -- the third day of the NFL draft. Although his marketability is likely to be tied heavily to making a team and playing well, he has received dozens of endorsement deal offers, which is unprecedented for an expected late-round pick.

Sam has 95,000-plus Twitter followers, more than any other potential 2014 NFL draftee except for quarterbacks Johnny Manziel, AJ McCarron and Aaron Murray.

Visa has been the exclusive payment services sponsor of the NFL since 1995.