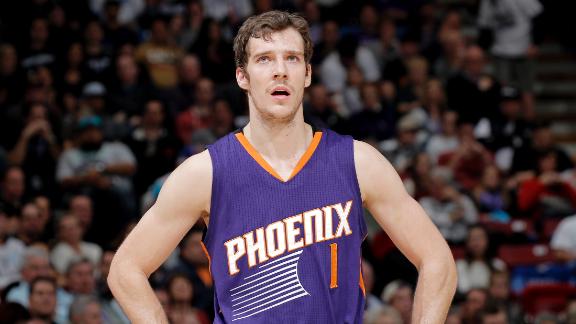 The Phoenix Suns are trying to move star guard Goran Dragic before Thursday's trade deadline after Dragic's representatives informed the team that he does not plan to re-sign in the desert this summer, according to league sources.

Sources told ESPN.com that the Suns are exploring all options to try to strike a deal before the 3 p.m. ET deadline to avoid losing their All-NBA point guard in July without compensation.

USA Today reported Tuesday night that Dragic's agent, Bill Duffy, informed the Suns that his client intends to sign elsewhere as a free agent this offseason, no longer willing to share a backcourt with Eric Bledsoe and Isaiah Thomas.

The Los Angeles Lakers and New York Knicks are destinations at the top of Dragic's wish list, sources said, with the Miami Heat also in the mix. But sources told ESPN.com that Houston, Sacramento and Boston all remain interested in pursuing a trade for him before the deadline, confident that they could sway Dragic to consider them long-term if they added him.The Rockets, Kings and Celtics are not on Dragic's list of preferred landing spots.

Sources say that the Celtics, in particular, are emerging as a dark horse contender for Dragic, given the numerous future draft picks Boston president Danny Ainge has amassed in recent months as well as his strong relationship with Suns general manager Ryan McDonough. Boston and Phoenix already have completed one trade this season, with Ainge dealing center Brandan Wright to the Suns for draft picks last month.

The Lakers, sources say, strongly appeal to Dragic in free agency and are aware of his interest. As ESPN.com first reported last week, the Rockets and the Lakers were trying to coerce the Suns into dealing Dragic even before Phoenix got a clear indication from the 28-year-old that his plans past this season would not include the Suns.

But sources told ESPN.com's Ramona Shelburne that the Suns, after fielding the Lakers' pitch for Dragic late last week, countered by offering Thomas to L.A. ESPN.com reported over the weekend that the Suns were trying to deal Thomas in hopes of reducing their backcourt logjam and appeasing Dragic, but sources say the Lakers quickly rebuffed the Thomas proposal, determined to maintain as much salary-cap flexibility as possible to chase the likes of Dragic, Marc Gasol and Rajon Rondo in free agency this summer.

If the Lakers feel they have the inside track to Dragic in free agency, they could pull out of the current trade hunt and simply wait for July, when they could offer a four-year deal estimated in the $80 million range. Another potential complication for the Lakers is that they will forfeit their 2015 first-round pick to the Suns if it falls out of the top five of the lottery (part of the Steve Nash trade in 2012). The Lakers' likely improvement if they acquired Dragic this week would thus endanger their chances of holding onto that pick, which team officials regard as an essential piece to L.A.'s rebuilding efforts around Kobe Bryant.

Sources told Shelburne that the Suns are prepared to discuss a Dragic deal with the Lakers this week if L.A. is willing to remove the top-five protection on that draft pick. The Lakers, sources said, also rejected that proposal.

Sources told ESPN.com on Tuesday night that Dragic has little interest in signing a long-term deal with the Rockets, but that complication is not yet dissuading Houston -- as with Boston and Sacramento -- from trying to engage the Suns in Dragic discussions. If a team that does not appear on Dragic's wish list swings a trade for him, it will be banking on the idea that inheriting the player's Larry Bird rights from the Suns would be a huge advantage in free agency.

Only the team that has Dragic on its roster after the deadline can offer him a five-year deal in free agency. For that same reason, Phoenix could elect this week to keep Dragic past the deadline, hoping that he can't resist the extra year the Suns could offer in July.

If no trade materializes, Dragic would head to free agency this summer seeking a four-year max deal from the likes of the Lakers and Knicks. Yet it's no secret that both of those teams, as well as the Heat, lack desirable trade assets, creating yet another obstacle to overcome if they continue to pursue a deadline deal.

ESPN.com reported as far back as July that the Indiana Pacers were likewise pursuing Dragic via trade. The list of teams interested in him now, sources say, stretches well into double digits.

In the wake of a breakout 2013-14 campaign in which he won NBA Most Improved Player honors and was an All-NBA third-team selection, Dragic has been forced to play off the ball frequently -- as well as together with Bledsoe and Thomas at times -- and is averaging just 16.2 points and 4.1 assists. Last season, Dragic averaged 20.3 points and 5.9 assists.

Shortly before the season, Phoenix signed Dragic's younger brother, Zoran, in an attempt to the make the older Dragic even more comfortable in the desert. But Zoran Dragic has struggled to earn minutes as a rookie, which is believed to be adding to his older brother's dismay.

The 29-25 Suns, meanwhile, lost seven of 10 games heading into the All-Star break and have seen their lead over Oklahoma City for the West's final playoff spot whittled to one game.

Teams Interested In Dragic
Marc Stein and Chris Broussard break down which teams have the potential to acquire Suns guard Goran Dragic before the trade deadline.