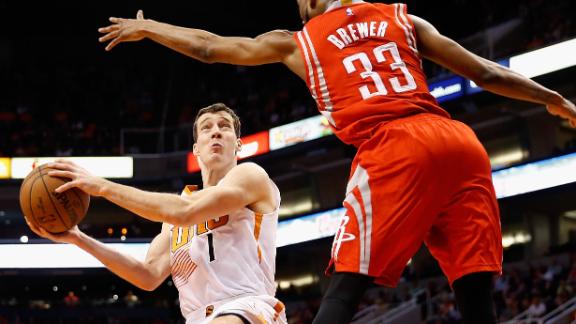 PHOENIX -- Fed up with his role on a team crowded with point guards, Goran Dragic said he has made up his mind to leave the Phoenix Suns, preferably by Thursday's trade deadline.

If not then, he has made it clear there is no way he would re-sign with the team when he becomes a free agent after this season.

"I don't trust them anymore," Dragic said after the Suns practiced Wednesday.

The 28-year-old guard's points and assists are down considerably from last season, when he was third-team All-NBA. He said he doesn't like his role of "standing in the corner" and wants to go to a team where he can "be a point guard, like in the past I was my whole life."

"To be a point guard, to run the team and have the ball in my hands and try to make plays for others," Dragic said. "That's who I am."

He often found himself playing the off guard or on the wing in deference to the Suns' other point guards, Eric Bledsoe and Isaiah Thomas. Sometimes all three were on the court together.

"Last year was great. This year it's different," Dragic said. "... Standing in the corner, it's not my game."

Dragic's agent, Bill Duffy, told the Suns on Tuesday that there was nothing they could do to keep his client with the team.

Now the Suns are up against the wall, trying to make a deal before Thursday's deadline or see Dragic walk as a free agent with no compensation to the team when the season ends.

This is the personable Slovenian's second stint with the Suns. He was drafted by San Antonio, on behalf of Phoenix, as the 15th pick overall in 2008. The Suns sent him to Houston during the 2010-11 season. He returned to sign a four-year, $30 million contract in 2012, with the ability to opt out after three years.

His 2012 acquisition came after the Suns traded Steve Nash to the Los Angeles Lakers.

After the Suns went through an awful 2012-13 season, Ryan McDonough was hired as general manager and put together a trade with the Los Angeles Clippers for point guard Eric Bledsoe. Phoenix thrived last season when Dragic and Bledsoe both played, compiling a 23-11 record, and the Suns won 48 games, just missing the playoffs.

In the offseason, with Bledsoe yet to sign a new deal, the Suns surprisingly acquired a third point guard, Thomas, in a four-year, $27 million sign-and-trade deal. Then Bledsoe signed a five-year, $70 million contract.

The chemistry of the previous season wasn't there.

"It was hard, different style," Dragic said. "[In the] corner, not getting the touches I usually get. I get touches, but they are not the same. That's the most frustrating thing."

"Was it ideal? No," Hornacek said. "Would it have got back to where it was last year? Maybe. But there's no reason talking about it now until the trade deadline goes by."

"We swing the ball from side to side," the coach said. "He's gotten the ball on the swing. Everybody has their perception of what's happening out there. Is it what it was last year? No. But again we're four plays away from being 33-21."

Dragic said he wished no ill will to anyone in the Suns' organization.

"I love the city, but it's just reached that point in my career where it's better for me and my family to move on," he said.

The Suns lost five of six going into the All-Star break. At 29-25, they are clinging to a half-game lead over Oklahoma City for the No. 8 spot in the Western Conference.

They are at Minnesota on Friday night.

What's Wrong With The Suns?
Goran Dragic asked to be traded, after Eric Bledsoe bargained very hard with them too. David Thorpe weighs in.

Suns Eye Dragic Trade
Amin Elhassan and Tom Haberstroh break down which teams will be the best fit for Suns guard Goran Dragic if he is traded by Phoenix.