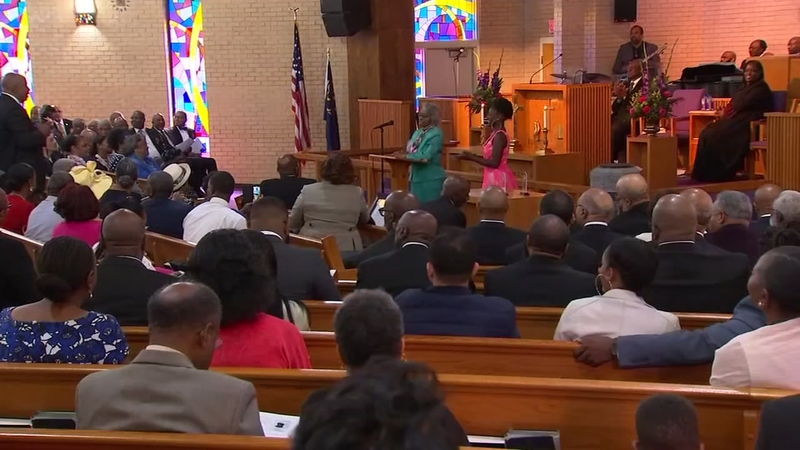 But on that hot June day in segregated Durham, seven young African Americans challenged both legal and defacto segregation when they asked for frozen treats inside the Royal Ice Cream parlor.

One of the groups, now known as the Royal Seven, was 20-year-old Virginia Williams--then and now a member of St. Joseph African Methodist Episcopal Church.

The church's current pastor, Reverend Jonathan C. Augustine, praised the courage of Williams and the other sit-in participants on the anniversary of their civil disobedience.

"Before the Greensboro lunch counter sit-ins of 1960, before the freedom rides of 1961, the heroism of the Royal 7 here in Durham really catapulted the movement," said Rev. Augustine, noting that the church is also celebrating more than a century of ministry in Durham.

Williams said when she and the others refused to leave the ice cream shop that day, "Eventually the police officers came."

When asked how those officers handled the demonstrators she replied, "Really gently. I mean they didn't want this thing to blow out of...I think they were very, very careful."

That subtle but insistent demand sparked civil rights demonstrations across the American South, the reason why thunderous applause for Williams echoed inside the church sanctuary on the first of a series of Social Justice Sundays at St. Joseph.

The pastor recognized Williams, other individuals and fraternal organizations with members in the congregation who've worked to advance civil rights, equal access and opportunities for all regardless of race, gender or any other reason once considered justification for bias or exclusion.

"The black church has always been at the forefront, at the epicenter of civil rights and social justice," Reverend Augustine said. "We are attempting to reclaim that place of prominence and its necessary especially at a time like now, because of some of the divisions that emanate from Washington."

His message, as they celebrate the courage of Williams and other pioneers: "That the church matters, that the church will be at the center of social issues and that social justice should be at the forefront of all of us."