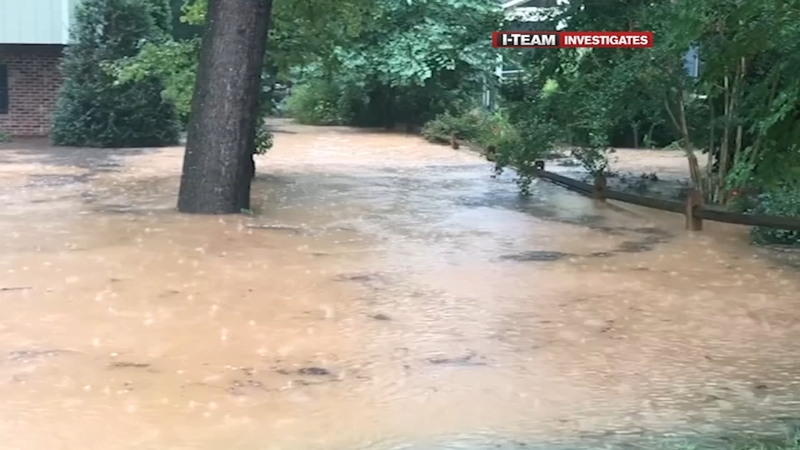 Raleigh considers redo of stormwater regulations as complaints pile up

RALEIGH (WTVD) -- The pictures from Jason Swicegood's home look like they could have been taken from Hurricane Florence.

"There was 10 inches of water in here," Swicegood said in his basement, which is barely below grade. "Every time we have a big thunderstorm or they're predicting heavy rains, we're worried about what's going to happen next if we're going to be flooded again."

Swicegood is among a growing community of Raleigh homeowners exasperated by heavy rains and worried about the effects of development on stormwater treatment and whether the city regulations are strong enough to mitigate flash floods.

"It feels like to us there's much more water coming through here than there used to be," Swicegood said "We've always had water in the yard coming through the channel but now it's a class five rapids sometimes when we have the hard rains."

An earlier I-Team Investigation reviewed several complaints arising from infill lots, where a property owner knocks down an old house and builds a new one. The lots, often smaller than one acre, do not have the same requirements for stormwater treatment that new developments larger than two acres have in Raleigh's Unified Development Ordinance (UDO).

Swicegood's issue, though, is not with an adjacent infill lot. In fact, the new development in the backyard was built in compliance of all existing regulations.

"Most of our stormwater devices were predicated on the idea that you could get five inches of rain in a day," Mendell said. "In the last few years we're finding that we get three to four inches of rain in one to two hours. Clearly the climate situation has changed in such a way that what we had set up in the past is not really working."

As for issues related to infill lots, Mendell noted that the city has cracked down on violators by eliminating excess warnings between the first notice of violation and then a fine.

According to the city, inspectors found 11 violations since the first I-Team report aired in May and all issues have been remedied.