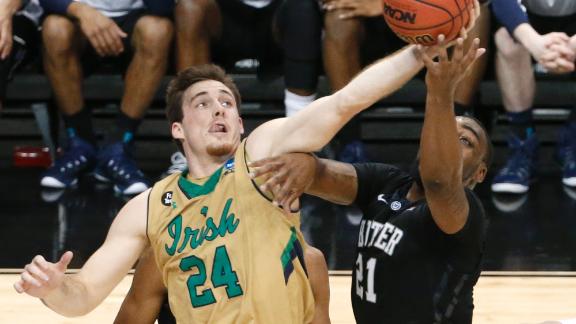 PITTSBURGH -- On the same dayNotre Damecoach Mike Brey finally earned the coaching success that had eluded him, with a Sweet 16 berth, he lost the woman who fueled him to succeed in the first place.

Brey announced minutes after the Irish's 67-64 win over Butler on Saturday that his mother, Betty, had died that morning of a heart attack. She was 84.

"It was kind of a tribute to her,'' Brey said of the game. "It was really a special night. ... I think she was definitely with us down the stretch.''

Brey said he spoke with his brother and sister, who were in Orlando, where his parents live. They encouraged him to coach in the game against Butler, and he said he never thought twice about coaching, believing he owed it to his players.

Brey opted to keep the news to himself. The Irish players didn't learn of Brey's mother's passing until athletic director Jack Swarbrick told them in the locker room after the win.

Brey had planned to address his players when they returned to the hotel early Sunday morning.

"The strength he has to go through something like that without mentioning it or acting like it, he hasn't skipped a beat,'' senior Pat Connaughton said. "He's been here for us countless times, and I hope he knows that this team is with him.''

Betty Mullen Brey was an exceptional athlete in her own right. She swam on the United States Olympic team in 1956 and even held the world record in the butterfly for a time. Later, she became a swim coach at George Washington University.

Betty Brey raised her kids to be competitors and pushed her son long after he became a head coach.

"I'd talk to her during the season and it was rarely, 'How are you doing?'" Brey said. "It was, 'You got them ready? Are they ready? Because I think we can beat Duke, Mike.' She was intense.''

Brey said he planned fly to Orlando on Sunday to join his family before readying his team for its regional semifinal in Cleveland. The Irish will play the winner of Kansas-Wichita State on Thursday.

Notre Dame Moving On After OT Win
Jay Bilas breaks down Notre Dame's performance against Butler in a 67-64 overtime thriller.