'Louder than ever:' Volunteers prep for 4th annual Women's March on Raleigh 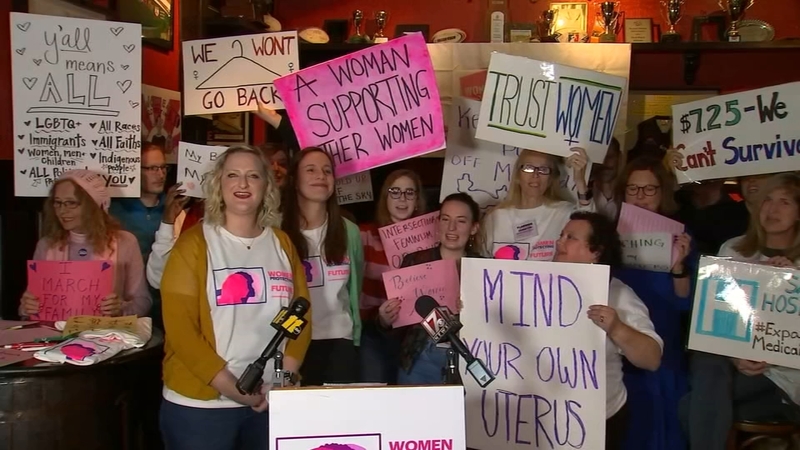 'Louder than ever:' Volunteers prep for 4th annual Women's March on Raleigh

RALEIGH, N.C. (WTVD) -- Busloads of North Carolina women are ready to assemble again on Halifax Mall; ready to recite a 13-point pledge, rally around those issues -- and of course they will march. They will step off passed the General Assembly, around the Capitol, and back.

It's not the first year, but to hear some tell it Thursday night -- it's the most important one yet.

On Glenwood South, women gathered to gear up for Sunday's march by making signs and training volunteers.

"So I'm here again this year to again call on lawmakers to recognize that their power comes from the people. It comes from us," lead organizer Molly Rivera told the crowd assembled inside Hibernian Pub.

Women Mobilize NC has drafted a pledge for rally participants to embrace. It's a litany of progressive causes: LGBTQ rights, a minimum wage boost and equal access to voting are among the issues included.

One of Elizabeth Crudup's top-line issues is criminal justice reform.

"My story is horrific and horrible, but it's not unique to America," Crudup said.

Her son Shannon Nyamodi is currently serving a 10-year prison sentence after pleading guilty to a murder-for-hire plot in Franklin County. Crudup insists her son was pressured into the deal and he had nothing to do with the crime.

"My son is now 25. And we have suffered a lot trying to navigate the system. He is not someone who is a bad person." Crudup said.

“It feels like we need to be louder than ever.”
• • •
With the presidential election and impeachment trial fueling more urgency, volunteers spent Thursday night gearing up for this weekend’s #2020RaleighWomensMarch #abc11 pic.twitter.com/oGJtXHsSRT

Last year's march attracted hundreds to Raleigh. Women Mobilize NC is a loosely affiliated coalition of volunteers -- inspired by the hundreds of thousands of women who marched on Washington in the days after President Donald Trump took office in 2017. That was back when Emma Ilaria wasn't paying much attention to politics.

"I thought that we were not as loud as we needed to be and I was definitely at fault," Ilaria said.

But the 29-year old said this year, with new urgency over the approaching election and the impeachment trial, feels more urgent than before.

"It feels like we need to be louder than ever. I feel like this year is when you need to be out there -- talking to the people about their vote, what issues are important to them and just be prepared."