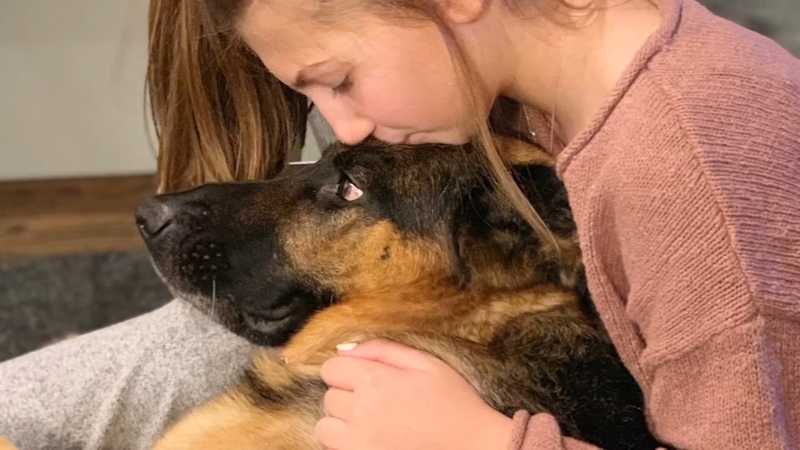 RALEIGH, N.C. (WTVD) -- A Raleigh family is dealing with a massive void in their home and hearts. The family's dog was hit and killed by a UPS delivery driver.

Mother Kelly Gibbs said her whole family is in shock after the loss of Gucci the German Shepherd.

Gibbs said her daughter was next to the dog when the driver came racing down their private street and hit the beloved member of their family.

"I think he took the brunt of the blow so that my daughter didn't have to," Gibbs said. "This wouldn't have happened had he not been speeding."

Gibbs said the delivery driver didn't stop at first, but then said something to a neighbor up the road.

"As he was flying by and my daughter is there screaming, he yelled 'There's a German Shepherd back there,'" Gibbs said.

Gibbs said Gucci was a highly trained dog and cost the family $10,000.

The family got him after their sense of security was scattered. Three men wearing masks and gloves robbed the home in 2015 and stole several valuable items.

Gucci was the family's protector and Gibbs credited him for shielding her child.

"He did what he was trained to do until the very end," she said.

Gucci used to give blood at a local vet hospital.

"He has saved hundreds of dogs and the fact was that he couldn't be saved because the trauma was too blunt," she said.

The crash happened February 13. A report was filed with the Raleigh Police Department.

"The driver is extremely upset about the situation," said UPS spokesperson Kim Krebs. "Our thoughts are with the owner during this unfortunate situation. We are investigating the incident and working through a resolution."

"We want, as a family the most, for these massive trucks that are flying through neighborhoods to slow down and follow the speed limits in the neighborhood," she said. "This could have been my child."