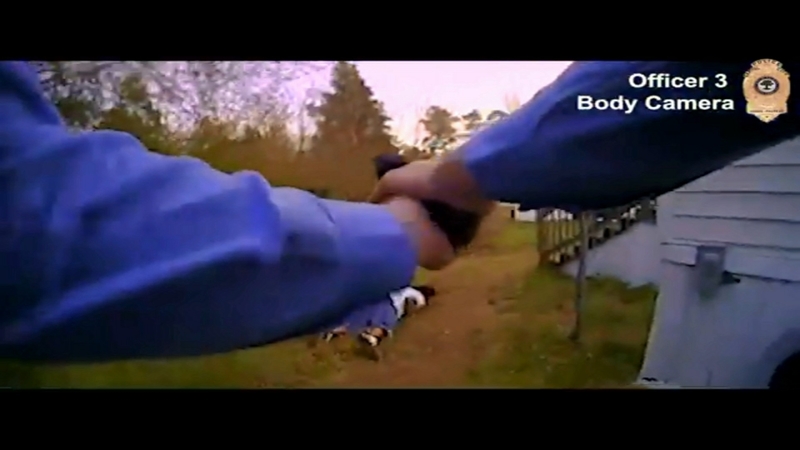 RALEIGH, N.C, (WTVD) -- Bodycam footage revealed Javier Torres, the man hospitalized in an officer-involved shooting on Tuesday night, was armed when he was shot.

Torres, 26, was shot by police once in the abdomen Tuesday around 6:45 p.m. on N. Rogers Lane near the Edgewater Place shopping center.

A judge authorized the release of dash and body cam video from four officers who responded to the scene.

Raleigh police released the video to clear up any ambiguities about whether or not Torres was armed.

Dashcam footage showed Torres ran when officers arrived and a chase ensued. Torres was carrying a pizza box and had a gun in his waistband

An officer chasing Torres shouted repeatedly ordered him to drop his gun.

As Torres ran from the sidewalk and into a grassy area between mobile homes, he appears to be unaware that a second police officer was waiting ahead of him.

Torres was running with the firearm in his right hand when he came face-to-face with the officer and was shot in the abdomen.

As he went down, he lost the gun. As police handcuffed him, Torres yelled repeatedly that he was unarmed. Police found the weapon nearby, lying in the grass by an air-conditioning unit.

Torres was shot once in the abdomen. Police rendered first aid until EMS arrived and took him to WakeMed, where he is recovering and faces multiple charges.

The anger on the scene of the shooting that boiled over into the streets of downtown Raleigh was fueled by viral misinformation on social media. Witnesses on Facebook Live claimed Torres was a 15 or 16-year-old child, shot in the back, carrying only a pizza box -- not who police later confirmed was a 26-year old man with a pizza, a firearm, who was shot in the stomach while brandishing the weapon at an officer.

"The confusion was based off social media," said Kerwin Pittman, executive director of social justice non-profit R.R.E.P.S., who was up all night in the uproar.

Pittman said the reaction, even while galvanized by misinformation, illustrates the pent-up frustrations of Raleigh's more marginalized communities about police violence on people of color. "(The initial claims weren't true) but it ignited a bomb that was already brewing. It's the instances that continually occur back to back to back, the feeling like they're not receiving justice."

“Moments like this will either define you or destroy you.”
• • •
Community leaders gather to discuss the response to Tuesday’s police-involved shooting in east Raleigh.
We’ll have that plus the newly-released Raleigh police body and dash cam videos tonight at 11. #abc11 pic.twitter.com/OKgWGVxViE

At Martin Street Baptist Church, Wednesday night, a community leaders gathered for a hastily-called meeting on the aftermath. At one point the sometimes heated discussion reflected the sometimes stark disconnect on the proper way to protest.

"(Tuesday night) has to be the last time that something like that happens in this city and there's not an organized response to it," said Rev. Frank White of Raleigh's Antioch Fellowship Church.

But community court advocate Joshua Bishop, a 20-something former gang member who now works to help save others from the criminal justice system suggested the older community leaders did not understand his generation. "I can advocate for my community and my hood and where I come from and my neighborhood, the struggle -- because some of y'all haven't been through the struggle."
Report a correction or typo
Related topics:
raleighcrimearrestofficer involved shootingman shotinvestigationraleigh police
Copyright © 2021 WTVD-TV. All Rights Reserved.
TOP STORIES
Pfizer to ask for approval of COVID vaccine for kids in matter of days
Hurricane Sam, 3 other systems occupy the Atlantic Ocean
LATEST: NC healthcare system starts offering booster shots
NC Walmart shooting suspect captured in Georgia
Hundreds of new jobs coming to Research Triangle Park
Deliberations continue in R. Kelly sex trafficking trial in NYC
Show More
Whole Foods is adding a $10 delivery charge
Fayetteville plant workers hold protest after 2 employees found dead
Here's what's in the bipartisan infrastructure bill
Facebook puts 'Instagram Kids' app on hold
US has enough COVID-19 vaccines for boosters, kids' shots
More TOP STORIES News