'The price tag is big': Bar owners desperate as Phase 2.5 shuts them out 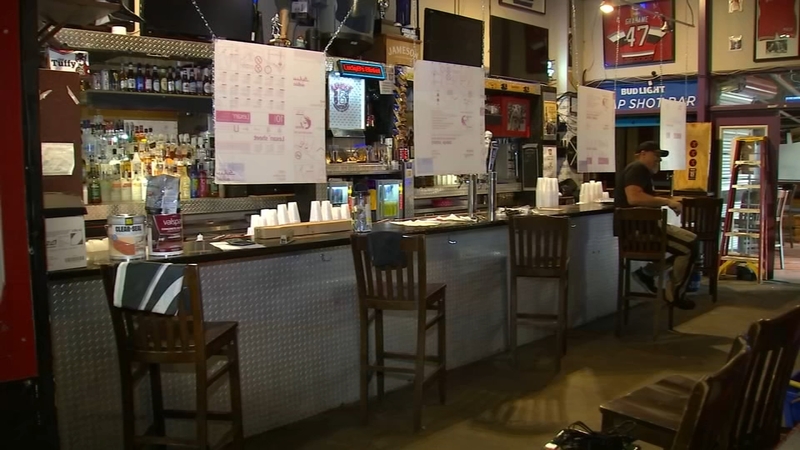 'The price tag is big': Bar owners desperate as Phase 2.5 shuts them out

RALEIGH, N.C. (WTVD) -- Bar owners are losing faith that Gov. Roy Cooper is doing everything in his power to help them make a Carolina Comeback.

As the state prepares to move toward Phase 2.5 on Friday, bars are again being left out.

Small business owner Jon Seel's bars have remained locked up and his COVID-19 debt is rising.

Seel no longer has the energy to be angry.

He has already permanently closed two of his restaurants during the pandemic and now is concentrating on saving his private bars during the extended shutdown.

Inside The Architect, behind this bookshelf, Seel has a speakeasy.

He argued he could safely do cocktail service here if given the green light.

"I can just as easily sit someone down and bring them a drink and follow the rules that any restaurant would have to follow," Seel said.

More than 1,000 bars are being ordered to remain closed.

That included places in Downtown Raleigh such as Circa 1888, Vita Vite Wine Bar, Social 113, and Lucky B's.

"It's tough," said Lucky B's Owner Mike Lombardo. "(If I would have known) we're going to be closed for six months, I would have went out and found something else to do."

Zack Medford, president of the North Carolina Bar and Tavern Association, sent a plea to the governor about the dire situation.

In the letter, Medford said, "We are out of money. We can't pay rent anymore. Most of us are living off credits cards at this point. We are at the end of our ropes."

Bar owners are begging for a chance to reopen even at 20 or 30 percent capacity.

"We're prepared to do that. We don't want to do it, but that's kind of how we feel right now," Lombardo said.

"We're just sitting here burning through money that we don't have. (We're) essentially going into debt to keep our doors open," Seel said.

That has been a big point of contention for bar owners.

Although you can grab drink at any restaurant in town, there is an 11:00 p.m. cut-off, extended by Cooper through Oct. 2.

Sean Umstead, who owns Kingfisher in Durham, respects the tough decisions public health officials have to make but believe bars play an important role in our culture.

"As things reopen this list gets shorter and shorter and bars are becoming more of a pariah and that is not the way they should be viewed," said Umstead. "Bars are a place where people meet to celebrate weddings, to meet their life partners, to mourn the loss of their fathers and mothers and brothers and sisters."

"It grinds my gears that people aren't thinking about what it means to truly keep places closed," said Umstead.

Gyms can reopen in NC Friday but bars still must wait