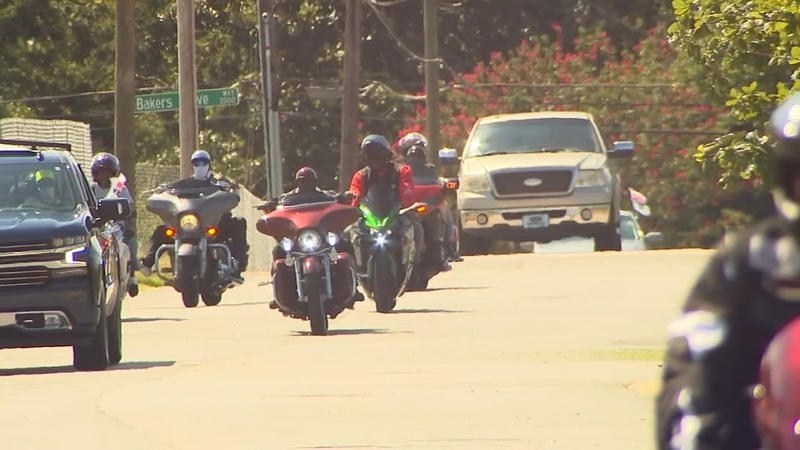 The car parade and caravan began at Washington Elementary School in Raleigh and wrapped up just past noon at the Food Lion on Rock Quarry Road.

According to a news release, the North Carolina chapter of the National Domestic Workers Alliance co-hosted the event and the Durham and Raleigh Workers Assembly, which includes Raise Up for 15, the National Black Workers Center Project, UE150 the North Carolina Public Service Workers Union, the NC AFL-CIO, Black Youth Project 100 Durham Chapter, Black Workers for Justice, and other labor and community organizations.

HAPPENING NOW: A car parade and car caravan rolling through the streets of Raleigh for what organizers are calling Black Labor Day. Their goal is to call attention to essential workers during the pandemic. #ABC11 pic.twitter.com/7PJiqR3CXz

"It means unity," said motorcyclist and supporter Andre Ward. "Unity with my brothers, unity with the community, unity with people I've never met before."

Despite its name, Black Labor Day is about all essential workers, said organizers and supporters.

Margaret Summers, who is white, was behind the wheel of her car honking and also showing her support.

The caravan also made its way through Walnut Terrace, Southgate, Chavis Park, and other neighborhoods in the Southeast Raleigh area to show their solidarity.

"We're the ones that have kept everything running," Summers said. "Essential workers, all the frontline workers -- and they get the respect they deserve."

Summers was one of the dozens of people who began their day in Raleigh, which included a representative from the North Carolina Public Service Workers Union UE150.

"(Essential workers) are the backbone of this country. We built this country," said Nathanette Mayo. "We are the ones who are going to continue to make this country come back from this pandemic."

Former postal service worker and member of the American Postal Workers Union said the response the group has received Monday has been outstanding.

"The reception that we've gotten from the community, people waving and throwing their fist up and peace signs, and thumbs up and all of that. It just means that they support essential workers," Ajamu Dillahunt said. "But it also says that the so-called essential worker during the pandemic is an essential worker all the time."

"I'm here for it, it's our livelihood at stake," said Raleigh resident Michael Pulley as he heard the honking outside of his apartment. He and his family came outside to lend their voices and show solidarity.

This man came outside with his family after hearing all of the honking. He told me he supports the job essential workers are doing during the pandemic and wants to see more displays of solidarity like this. #ABC11 pic.twitter.com/kX1qRFIQgI

"Black Labor Day! It's amazing," Pulley shouted. "Everybody should be participating in it."

Monday afternoon, the group reconvened and welcomed more supporters in Durham at the public health building. The group circled the detention center several times before passing the courthouse and driving through Duke's campus.