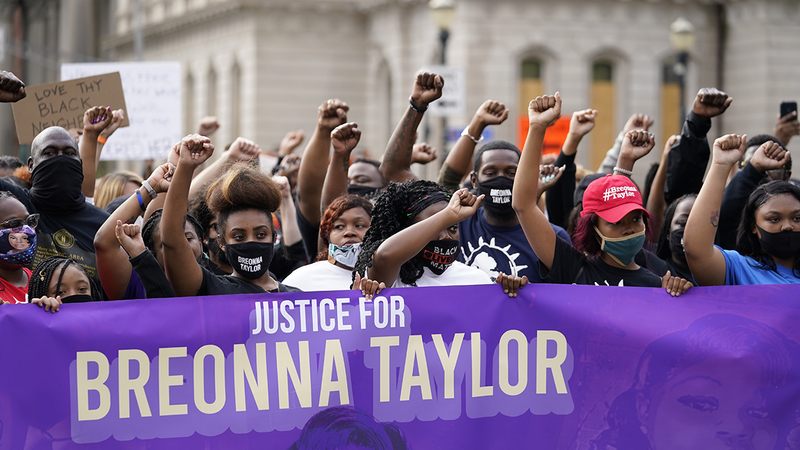 LOUISVILLE, Kentucky -- The release of secret grand jury proceedings in Breonna Taylor's killing by police will be delayed until Friday, according to the Kentucky attorney general's office.

Daniel Cameron's office filed a motion Wednesday asking a court in Louisville for a week's delay to allow the names of witnesses and their personal information, including addresses and phone numbers, to be redacted.

Cameron's office says a judge granted a shorter delay, saying the material should be made public Friday. The audio recordings were originally supposed to be released Wednesday.

Cameron's office sought the delay "in the interest of protection of witnesses, and in particular private citizens named in the recordings," according to the filing. The recordings are 20 hours long.

Taylor was shot and killed in her Louisville home by police who were executing a narcotics warrant in March. The grand jury decided this month not to charge any of the police officers involved with her death; instead, one officer was charged with shooting into a neighboring home.

That decision angered many, and protesters took to the streets in Louisville and around the country to demand accountability for her killing, as frustrations spilled over after months of waiting for Cameron's announcement. Activists and Taylor's family called for the grand jury file to be released.

One of two Louisville police officers shot during protests last week called for law enforcement, protesters and other city residents to work together to move forward.

Maj. Aubrey Gregory, who was shot in the hip, returned to light duty earlier this week. He said fellow officer Robinson Desroches, who was shot in the abdomen, is still "in a lot of pain" and faces a longer recovery. Gregory said he doesn't blame all protesters for the actions of the gunman.

"If we can't come together to find solutions, then we're not going anywhere," Gregory said. "Violence has never been the answer and never will be."

1 officer indicted in Breonna Taylor case; not for her death (1 of 8)

A Kentucky grand jury declined to indict any police officers for Breonna Taylor's death in March. One was charged with wanton endangerment to firing bullets that struck neighborhin

Authorities arrested 26-year-old Larynzo Johnson in the officer shootings, charging him with two counts of first-degree assault on a police officer and 14 counts of wanton endangerment. Johnson has pleaded not guilty.

Facing questions about the grand jury this week, Cameron acknowledged that he did not recommend homicide charges for the offices involved. Instead, he only recommended one of the officers be indicted, for the wanton endangerment of Taylor's neighbors.

Cameron, a Republican protégé of Senate Majority Leader Mitch McConnell and the state's first African American attorney general, said the other two officers who fired their guns were justified because Taylor's boyfriend had fired at them first.

Cameron said the record will show that his team "presented a thorough and complete case to the grand jury."

Taylor, a 26-year-old emergency medical worker, was shot five times in her Louisville apartment on March 13 by officers carrying a narcotics warrant. Taylor and her boyfriend were watching a movie in her bedroom when police came to her door and eventually knocked it down. The warrant was related to an investigation of a drug suspect who didn't live with her, and police found no drugs at her apartment.

Former officer Brett Hankison, who was fired from the force for his actions during the raid, pleaded not guilty to three counts of wanton endangerment on Monday.