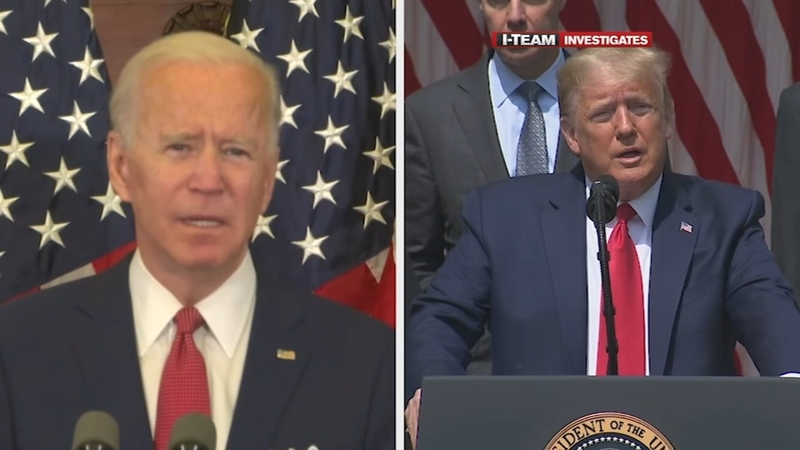 The official end of the election is when all the votes are counted and certified by the State Board of Elections, but voters and campaigns rely on an army of statisticians and political scientists to mathematical projections to offer some clarity on the expected results.

"The last thing that should matter on Election Night is what campaign officials are saying about the election," Rick Klein, ABC News Political Director, said. "At that point it's about the numbers. It has to be about the data and you need to divorce entirely from any information that could be political spin."

"99.5% is the mathematical certainty that's the standard they use," Klein said. "We're not predicting stuff, we're not throwing darts. We're not making guestimates. We're making mathematical projections. That does mean you can do that without 100% of the vote."

The projections are based on the incoming results of the election as they're uploaded and posted by county and state officials, but they're also extrapolated from exit polls, party registrations and inferences from geographic and demographic data.

"It is a moving target and there's no magic number (of votes) that we need to see before we make a projection," Klein said. "Obviously we need to see some critical mass of vote, but it can be if the data points in one direction, there could be a statistical certainty about it. They're not just looking at the raw vote total. They're looking at where it's coming in, trends from other states and how that's matched up. You can learn a lot about how a nation votes and it's not necessarily precinct by precinct."

No projections are made until all polls close in a given state. There's also no deadline to make a projection--the statistics can continue to roll in after Election Night.

WATCH: When will we know who wins the 2020 election?
EMBED More News Videos

When will we know who wins the 2020 election and becomes the next president? It could take days or weeks, depending on how quickly ballots are being counted in a few key battleground states, like Wisconsin and Pennsylvania.

"We are very conservative about these things. There is no race to be first. There is no pressure exerted on them or felt by them to be faster than anyone else. When another network makes a projection, they don't care. They're going to keep looking at the data the way they look at it."
Report a correction or typo
Related topics:
politicsncwashington d.c.donald trumpelection dayabc newsvote 2020nc2020joe biden2020 presidential electionpresident donald trumpvice president joe biden
Copyright © 2021 WTVD-TV. All Rights Reserved.
VOTE 2020
103-year-old Black woman recalls not being able to vote
Doug Emhoff becomes 1st second gentleman
1st Black, Asian woman elected VP: Watch Kamala Harris' journey
How to pronounce Kamala Harris' name and what it means
TOP STORIES
1 dead, several injured in Friday morning crash on I-40
LATEST: Nearly 2,000 COVID-19 cases reported Friday
Untreatable 'superbug' fungus has spread in 2 US cities, officials say
Woman found dead near I-85 exit-ramp, Vance County deputies say
Texas begins jailing border crossers on trespassing charges
Meet the duo turning heads on the streets of Durham
Show More
'Indians' no more: Cleveland finds new name for baseball team
Chef Mario Batali, partner to pay $600K in sex harassment settlement
Morgan Wallen speaks out on using a racial slur in 'GMA' interview
UNC, Duke to mandate COVID-19 vaccines for healthcare workers
Cary student earns perfect ACT score
More TOP STORIES News