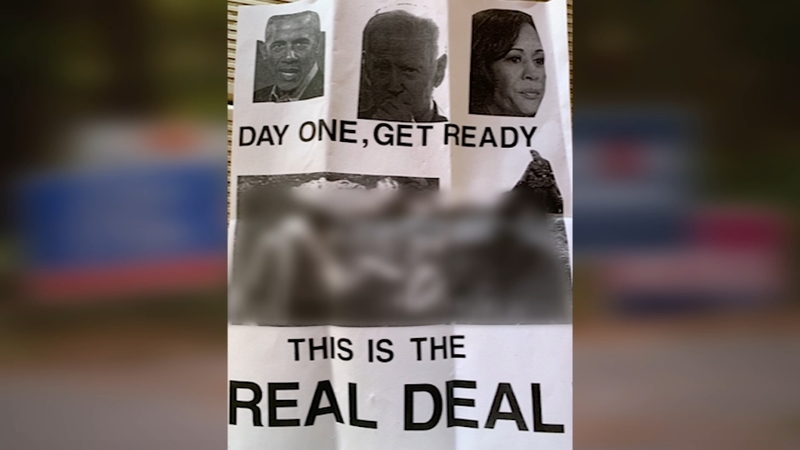 APEX, N.C. (WTVD) -- Anxiety and stress after Election Day is reaching a tipping point in one Wake County neighborhood.

"These people are not ok. This is not ok," said Connie, one of the neighbors who discovered the material.

The packets include a fake dollar bill with former Vice President Joe Biden's face and a note with the faces of Biden, President Obama and Senator Kamala Harris cut out and pasted together with what appears to be the body of an emaciated child.

The caption reads: "Day one, get ready, this is the real deal."

A third note showcases other prominent Democrats and rambles about them killing millions of Americans.
There are also images of open graves.

Connie said yesterday afternoon, her nanny discovered these leaflets around the neighborhood while with her children. Her husband found one on their property Monday.

Yesterday, they contacted police and alerted their community on social media.

"It just seemed really scary, unhinged, the fact that someone is taking the time to create these awful leaflets and spread them around in the midst of a really tense election. It just makes me feel really sad," said Connie.
Neighbors' personal political signs are still visible in the neighborhood, including signs of love and unity.

"I hope that whoever is doing this is caught. And I hope they get some help," said Connie.

Apex Police Department said they have only received the one report, but asked people to call them immediately if they receive these packets. Call the non-emergency line at (919) 362-8661.
Report a correction or typo
Related topics:
apexdemocratsneighborhoodthreat
Copyright © 2021 WTVD-TV. All Rights Reserved.
More Videos
From CNN Newsource affiliates
TOP STORIES