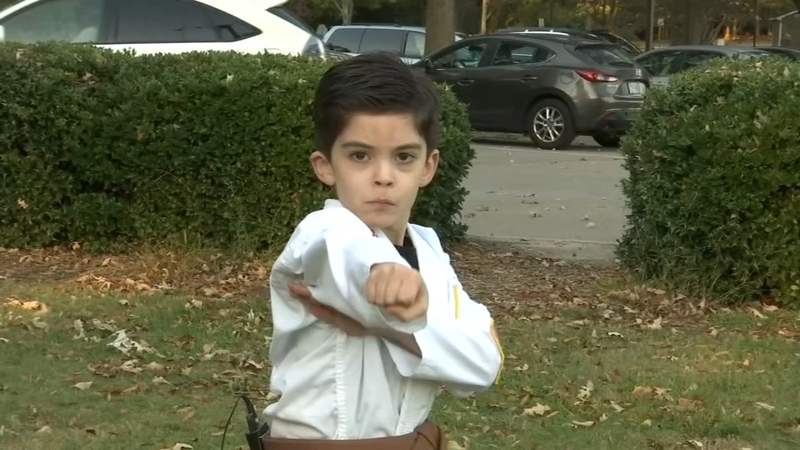 RALEIGH, N.C. (WTVD) -- A Raleigh 6-year-old is using what some may see as an obstacle as a springboard to push him forward.

He's now preparing to become one of the youngest students in the United States to earn his first dan black belt in a version of martial arts called Hapkido.

"Where I get my courage from is mostly my Hapkido and my confidence," Harvey Alvarenga said.

Harvey started Hapkido when he was two years old, and it has turned into a way for him to hone his hyperactivity and hyperfocus that comes with his diagnosis of autism and ADHD.

"We see how he struggles, but then when he gets into that frame of mind of doing Hapkido it's a completely different person that's more focused and can maintain his hyperactivity and his hyperfocus completely," Kris said. "It's been very rewarding, very inspiring. We've seen it more than anything become a part of him in so many ways."

"It's hard to believe at one time we didn't hear him speak," said his mother, Joanna Alvarenga. "He wouldn't say his name he would just kind of like little babies would do, point and grunt to things. There were a lot of tears a lot of time spent wondering, will my son speak, will he be able to interact with other kids, will he have friends? How will I know what he needs. What will his future bring. To see how far he's come has just been an amazing turnaround."

Harvey and his parents focus on showing his abilities and not the disability. He's been homeschooled since the age of three and is now six years old in fifth grade. His IQ range qualified him to become a member of Mensa.

"He has this amazing ability to read something and retain it," his mother said. "I don't know if it's photographic memory or what but he can read a book and he'll tell you where the word is, what page it is, what line it is, and he can tell you what outfit he wore when he was two years old, what color it was, how it felt to him. What the smell in the air was that day. That focus has led to great success in his home schooling, his Hapkido and his martial arts."

"I think he is proof that anything, if you work hard enough can happen," Harvey's dad said. "I know everybody's story is different. I am very sympathetic to all the stories. Maybe not everyone can do Hapkido, maybe not everyone can move up in the grades. One thing I've learned is that every child we come across who has special needs has their own unique ability. If we can just find a way as a community to bring that out of them rather than focusing on that, on the negativity, this will just be a better world I think."