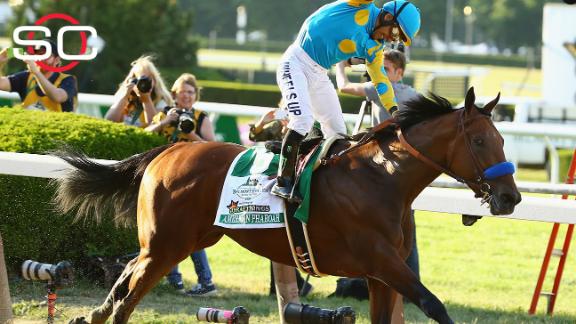 Perhaps hoping to hold on to the memory of being there or watching it, most race fans who bet $2 on American Pharoah to win at the Belmont Stakes on Saturday walked away from cashing in their tickets, leaving $315,829 behind.

Belmont Stakes spokesman John Durso Jr. told ESPN.com that there were 94,128 $2 American Pharoah to win tickets purchased at the track at Belmont Park and Aqueduct Racetrack, both of which are controlled by the New York Racing Association. But after the horse won the Triple Crown, 90,237 of the $2 tickets, which are worth $3.50, went uncashed.

Should a bettor want to cash his or her ticket, the deadline is March 31, 2016. After that, the money is pooled and goes back to New York State.

The uncashed tickets don't include anything other than $2 tickets and don't include bets placed by regular bettors on NYRA Rewards, where payment is immediately made.

With a convincing win in the Belmont, American Pharoah became the first Triple Crown winner since Affirmed did it in 1978.