Dwyane Wade, Heat to address contract issues within next week 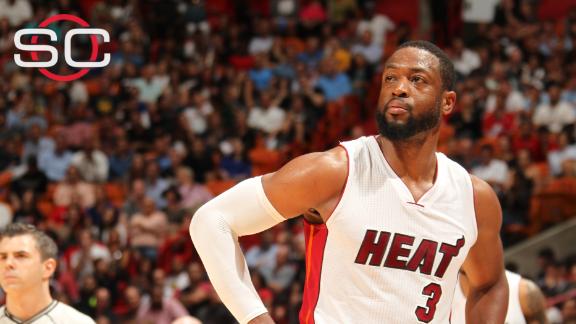 Dwyane Wade and the Miami Heat are planning to meet within the next week to address contract issues and attempt to reach an agreement on the future, multiple sources told ESPN.

Wade has until next Monday to decide on whether he's going to opt in for next season and earn $16.1 million or become an unrestricted free agent.

Wade and the Heat sit far apart on their desires; the Heat would prefer for Wade to opt into the deal and Wade would prefer a new, richer and longer-term contract, sources said.

The sides have not formally spoken in some time. They had discussed a new contract for around $10 million per year for up to three years beyond his current deal, sources said.

Wade, who took a pay cut in 2010 when LeBron James and Chris Bosh signed and again last summer to help make cap space to sign Luol Deng, is interested in a pay raise and not a pay cut.

It is Wade's desire to stay in Miami and finish his career with the Heat, sources said. However, the gulf between the sides has led to acrimony in recent weeks and cast doubt on Wade's future. Wade has been disappointed at the team's initial overtures considering the money he has left on the table in his past two free agencies, sources said.

Wade might have other options if he wants to move on from the Heat. One is the Los Angeles Lakers, who are expected to have ample cap space in July, sources said.

The Lakers are currently focused on Thursday's draft, where they have three picks in the top 34, and Wade has not declared whether he will be a free agent next month.

James, who is Wade's close friend, has expressed an interest in reuniting with him. However, that scenario is unlikely with the Cleveland Cavaliers. The Cavs will not have salary-cap space this summer and could offer Wade only a maximum of a $3.4 million from the taxpayer midlevel exception.

The only way for Wade to get more from the Cavs would be in a sign-and-trade, or for the Heat to trade Wade to Cleveland after he picked up his option for next season at $16.1 million. It is extremely unlikely the Heat would participate in helping Wade get to Cleveland, making these scenarios remote.

Also, the Cavs are unlikely to be able to take back a player in a sign-and-trade this summer. That's because it would trigger the Cavs' payroll to be hard-capped at about $85 million -- known as the luxury tax "apron" under league rules -- and could prevent them from re-signing free agents such asKevin Love, Tristan Thompson, Iman Shumpert and J.R. Smith.

Last week, Cavaliers general manager David Griffin said it was a priority to re-sign all of the team's key free agents, which includes James.

Wade also is interested in the Los Angeles Clippers, sources said, but they are as limited by their commitments and the salary-cap rules as the Cavs. Getting to the Clippers would take either a massive pay cut or the Heat's unlikely cooperation in a sign-and-trade.

As for the Heat, they have several other roster issues they have to deal with before they might be able to make their best offer to Wade. One is Deng, who has his own opt-in option on next season for $10.1 million that he must decide on by the end of the month.

According to multiple league sources, the Heat are attempting to trade guard Mario Chalmers and big man Chris Andersen to help free up some salary that could ultimately be diverted to Wade. Both going into the final years of their contracts, Andersen and Chalmers are contracted to make a combined $9.3 million next season.

Point guard Goran Dragic is expected to opt out of the final year of his contract with the Heat at $7.5 million and become an unrestricted free agent. The Heat have made re-signing him a top priority.

ESPN reported last week that the Heat are planning to make Dragic a five-year contract offer in excess of $80 million. This leaves them in a complex salary situation when it comes to Wade.

The Heat and the Brooklyn Nets are the first teams subject to the so-called "repeater" tax for the 2015-16 season. This is an excess luxury tax penalty for teams that are taxpayers for four out of any five years.

With Bosh locked in at $22 million for next season, the possibility of Deng staying at $10 million and the potential Wade and Dragic free agencies, the Heat are positioning themselves for potentially the most expensive payroll in team history when including tax.

This explains the Heat's motivation to avoid a raise for Wade at this time and perhaps find a way to lower his salary and spread more guaranteed money over following years when the salary cap will go up and ease the tax burden. Wade's limited other options also explain why the Heat feel they might be able to play a little hardball at this stage of the game.

Many league executives expect Wade to ultimately work something out with the Heat. But there could be some drama coming over the next few weeks, especially if the sides can't find common ground after meeting before Wade's opt-in deadline next Monday.