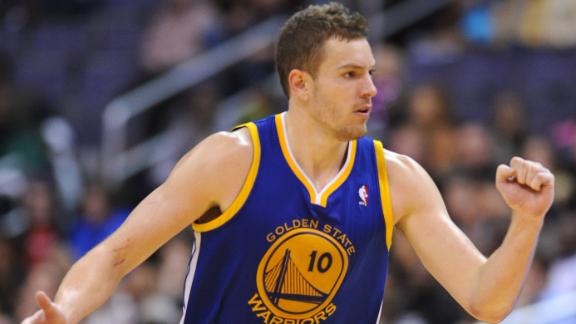 David Lee is headed to the Boston Celtics, according to league sources.

Sources told ESPN.com that the Golden State Warriors have agreed to trade Lee to the Celtics for veteran swingman Gerald Wallace.

The deal can't be officially consummated until Thursday, when a leaguewide moratorium on roster business is lifted.

Lee, 32, lost his starting spot to Draymond Green early in the season due to bad timing as much as anything else, as he suffered a hamstring injury after a strong showing in training camp. On Tuesday, Green tweeted his appreciation for Lee's tutelage:

Once the 67-win Warriors launched to a 21-2 start with Green as the starter, Lee was forced to settle for spot minutes in the midst of the fifth season of a six-year, $80 million deal he signed with Golden State in the summer of 2010.

Just by virtue of shedding Lee's $15.4 million salary, Golden State's payroll for next season would drop under $100 million even if it decides to keep Wallace on the roster, which would net a luxury-tax savings of nearly $20 million because Lee's salary for 2015-16 is $5.4 million higher than Wallace's.

The Warriors also have the option of waiving Wallace and using the stretch provision on his contract, which would reduce their tax bill even further and force Wallace to settle for payouts of $3.3 million over the next three seasons.

As ESPN.com reported last month after the Warriors won their first championship since 1975, both the team and Lee's camp mutually agreed to try to find him a new home as soon as possible to give the former All-Star a chance to play more minutes and loosen things up financially for the Warriors, who recently awarded a new five-year contract in excess of $80 million to Green and still have a contract extension to negotiate with Harrison Barnes between now and Oct. 31.

The Warriors successfully realized their goal of moving Lee without surrendering any other assets. For Boston, Lee will join Toronto Raptors free-agent big man Amir Johnson as a frontcourt newcomer after Johnson agreed to terms last week on a new two-year, $24 million deal with the Celtics.

Lee earned a measure of redemption in the midst of the NBA Finals when Warriors coach Steve Kerr suddenly embraced small-ball lineups after Golden State could only manage a split at home in the first two games. Lee served as the first big man off Kerr's bench in Games 3, 4 and 5.

Lee had been the Warriors' second-longest tenured player, but sources said earlier in the offseason that the Warriors have privately acknowledged to Lee and his agent, Mark Bartelstein, that it would be unfair to the former All-Star to ask him to continue to serve in a limited role next season after Lee accepted his diminished minutes without complaint all season.

"I'll have chances from here," Lee vowed in an interview with the NBA Insiders on ESPN Radio after watching all of Game 1 of the NBA Finals from the bench. "It's not like I'm trying to prove to people that I'm able to play this game. Everybody knows that I'm capable. But it's been kind of cool to put the ego aside and say, 'Hey, this is about something bigger than me.' There was always the talk when I was in New York that I was a guy that could put up numbers but couldn't help the team win ... [that] it was all about me and not the team.

"A lot of guys that are on bad teams that put up big numbers kind of have that rap, and that's not what I want to be known as. I want to be known as a great teammate and a great competitor. So I think I've proven that this year. That my attitude hasn't changed the entire season. I've been ready."

Wallace, acquired as part of Boston's blockbuster with the Brooklyn Nets in 2013, played sparingly in two seasons with the Celtics but was always ready when called upon, and coach Brad Stevens often expressed his fondness for Wallace. After being a bit too blunt with his assessments of a young Celtics team in his first months with the team, Wallace eventually softened and rationed his tough love.

From summer league in Utah on Tuesday, Celtics second-year guard Marcus Smart reflected on the wisdom Wallace brought in their one season together in Boston.

"Gerald's a great great guy," Smart said. "He's one of those vets that he tried everything to teach you from what he learned in his experience in the league."

Smart playfully jabbed the 32-year-old Wallace when pressed on his veteran leadership.

Smart tried to steer clear of trade chatter until the deal becomes official but called Lee a "great player."