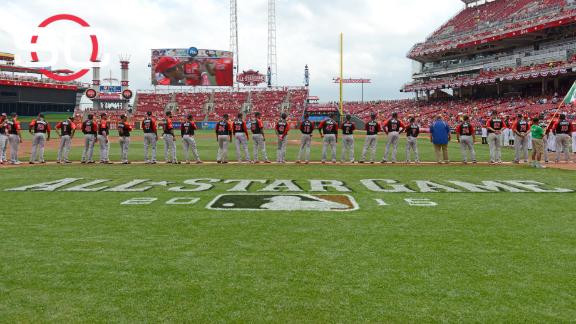 CINCINNATI -- Major League Baseball will do "everything possible" to hold Monday night's Home Run Derby as scheduled, despite a forecast of severe weather in the Cincinnati area, MLB spokesman Pat Courtney told ESPN.com on Monday.

Baseball officials have discussed numerous contingency plans which could conceivably include shortening the Derby or holding it on Tuesday afternoon if absolutely necessary.

However, baseball officials were not ready to discuss those plans publicly unless it was necessary to implement them.

"We are going to do everything possible to get in the Home Run Derby," Courtney said. "If not, we will immediately announce plans."

For now, MLB has agreed to shorten the original plan for this year's format, which will be in its first year of implementation.

Instead of a five-minute running clock, contestants will have four minutes to hit as many homers as possible. The thresholds necessary for batters to gain extra time have also been increased, and though the clock will no longer stop on a homer in the final minute, players will still be allowed one 45-second timeout.

Only once since the contest began in 1985 has a Home Run Derby been rained out -- in 1988, before the most recent All-Star Game held in Cincinnati. Back then, however, the Derby was simply staged in the afternoon, following All-Star batting practice. Because it wasn't the prime-time extravaganza it is today, it was not rescheduled.

Now, though, it is considered such a major part of the All-Star landscape, with a sellout crowd and tickets costing $120 and up, that MLB intends to find a way to have the Derby take place, no matter how much the original schedule needs to be altered by weather.