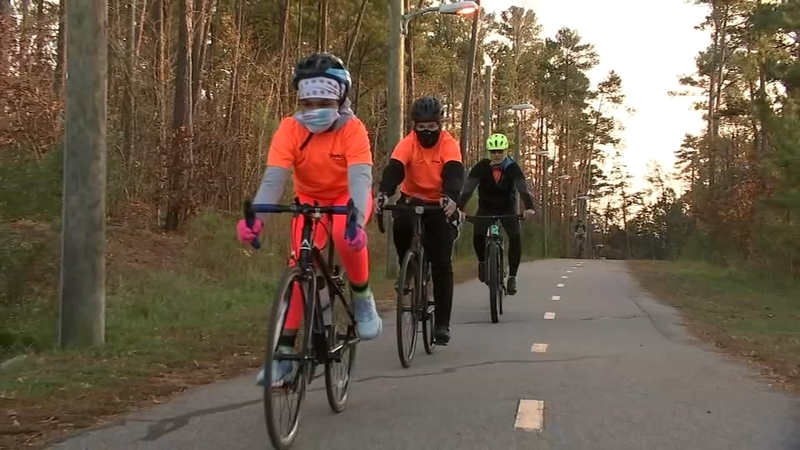 DURHAM, N.C. (WTVD) -- Each year the world's best bikers compete in what's known as the world's most prestigious and difficult bicycle races - the Tour de France. One group of riders here in Durham started their own version of the race, the Tour de Friends.

Every Thursday the club meets up in Durham for a weekly ride through the Tobacco Trail.

"It's a mental release more than anything," said Lynn Boyer. "You could have a stressful day at work and when you get out on the bike you just forget about everything. It's just all about being with friends."

Two years ago, Boyer founded the group which started out as just four people. From there, he posted an ad on the TV at Bell and Howell -- where he works -- and started sending weekly emails to remind people about the ride.

It worked; the group has grown to 30 people.

"We have from the President of the company all the way down to my granddaughter who is 9-years-old," said Boyer. "Most of it is associates at work but we have in our neighborhood here we have 8 people who ride from my neighborhood."

"I just look forward to riding and being outside," said Boyer's neighbor, Don Nicoletta. "I ride a lot as it is anyway. I've ridden close to 4,500 miles in the last 12 months. This was just another opportunity to get out with people and ride."

The group meets in the parking lot behind Edible Arrangements on Fayetteville Road in Durham and rides anywhere from 10 to 20 miles. Boyer said he typically rides in the back making sure everyone is accounted for and returns safely.

"We have what I call first gear, second gear and third gear people," said Boyer. "First gear are just starting out and learning to get back into it again. Second gear are progressing pretty good and third gear they're just off and running like crazy."

"We had one gentleman that started, we ride over by Southpoint Mall on the Tobacco trail, the first time out he could barely make it up the hill," Boyer said. "Now he's one of the front runners in the pack in just one year. It's amazing to see somebody grow from starting out to leading the pack now."

The group has created a positive community encouraging one another to stay active with friendly competition but it's also been an outlet during the COVID-19 pandemic and a safe socially distant activity.

"I love seeing all the kids out there," said Nicoletta. "When I first moved down here and rode the greenways I don't think there were as many younger kids riding bikes. Since COVID has hit there are just a bunch of them and I really enjoy seeing that and I hope they'll stay with it once this is all over and continue to ride."

The group is always expanding and anyone looking to join you can show up on Thursdays between 3:15 p.m. and 3:30 p.m. to the parking lot behind the Edible Arrangements on Fayetteville Rd. in Durham.
Report a correction or typo
Related topics:
sportsdurhamdurham countyexercisebike racebikes
Copyright © 2021 WTVD-TV. All Rights Reserved.
EXERCISE

Learn how to bust a move on roller skates 2 charged in fight over spot in line at Knightdale gas station
LATEST: Wake, Durham counties to offer vaccine to teens ages 12-15
Biden beefs up cybersecurity after pipeline hack | LIVE
McDonald's raising US workers' pay in company-owned stores
'Lack of empathy' in Black doctor's care before COVID death: Report
Show More
Where new COVID outbreaks happened after states reopened
Why are fears of high inflation getting worse?
Panic-buying taking toll on fuel supply and mental health
There's plenty of gas in the U.S. The problem is getting it to NC
Raleigh natives react to ongoing tensions between Israel, Palestinians
More TOP STORIES News