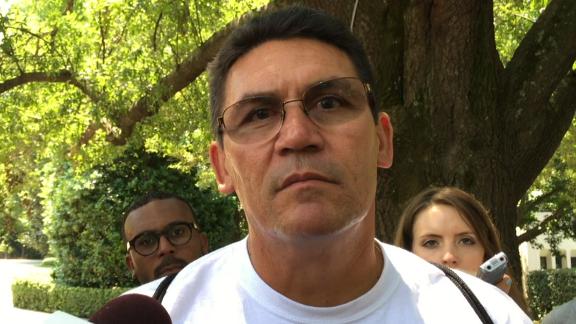 A team official said the organization's thoughts first and foremost are with Ron Rivera. The official also acknowledged that because Mickey's home and family are in Reno, Nevada, Ron Rivera might miss the start of training camp to attend funeral services.

Rivera tweeted about his brother's death on Tuesday.

Rivera told The Charlotte Observer in January that he found perspective in his brother's battle while the Panthers were going through a two-month losing streak and while he was dealing with the loss of his house to a fire.

Rivera was given a game ball after Carolina beat the Arizona Cardinals 27-16 in the NFC playoffs. He then gave the ball to his brother.

"Knowing what he's been battling and going through, any of the problems I've had -- even this fire -- seem insignificant," Rivera told the newspaper at the time.

Secondary coach Steve Wilks would lead the team in Rivera's absence. Promoted to assistant head coach in February, Wilks ran practice on the final day of minicamp in June so Rivera could attend the graduation of his daughter from UCLA.

Wilks also handled many of Rivera's duties while Rivera dealt with his house fire last season.

Rivera: It's been a series of ups and downs
Panthers head coach Ron Rivera discusses the difficult times he and his family are facing due to his brothers passing that will cause him to miss team practices through the weekend.
Related topics:
sportsespnminicampron riveracarolina panthersnfldiebrothercancer
Copyright © 2020 ESPN Internet Ventures. All rights reserved.
More Videos
From CNN Newsource affiliates
TOP STORIES