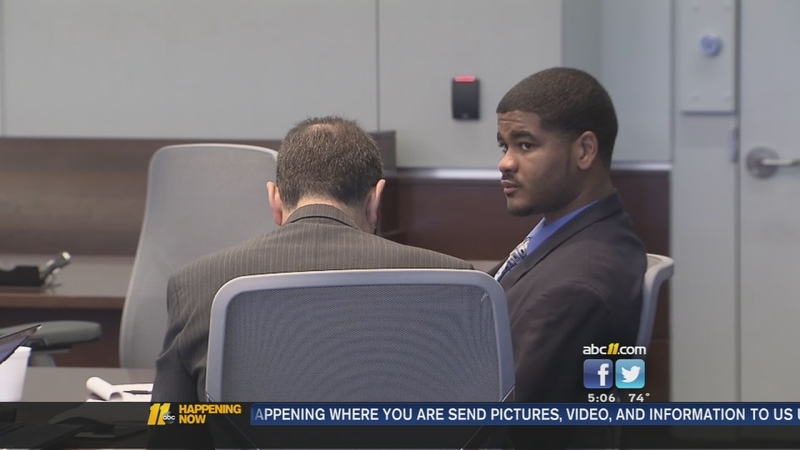 DURHAM (WTVD) -- A man on trial for a 2012 altercation that left a Durham police officer with a gunshot wound was back in Durham County Superior Court on Thursday.

Carlos Antonio Riley Jr. was indicted by a Durham County grand jury in early 2013 on several charges that stemmed from a traffic stop on December 18, 2012.

Authorities say around 10:20 a.m. on that day, Officer Kelley Stewart stopped Riley, who was with two other men, near the Forest Point apartment complex on Forest Road, near Guess Road and Broad Street. During a struggle, Officer Stewart was shot in the leg.

On Thursday, an intense debate over whether Stewart filed a worker's compensation claim delayed testimony. Defense attorney Alex Charns notified the judge about several motions he was filing, including a motion to dismiss the controversial case based on prosecutorial misconduct.

Charns filed a motion to dismiss on Wednesday as well. A state witness wasn't informed a certain topic was off-limits, and the jury was exposed to information that should not have been disclosed.

Thursday, Charns said he's asked the state repeatedly to produce a copy of Stewart's worker's comp claim, if one exists. The judge granted both sides a recess to prepare their arguments on why, or why not, the claim should be admitted into the case.

"Here in the middle of the trial, they don't know whether he filed a workers comp claim to be compensated for being injured. It's really flabbergasting to me," said a frustrated Charns.

The worker's comp claim is significant if Stewart initially reported his shooting as an "accident."

After an extended recess, the prosecutors told the judge that Stewart's comp claim was located. It will be sent electronically and sealed in an envelope for the judge's review. Whether it'll be considered evidence, the judge will have to decide.

A Durham officer, Andre Richards, took the stand after the recess on Thursday. He testified that he found several items, including a pocket knife and a bloody towel and clothes, at Riley's mother's home.

The second witness of the day works for DPD forensics and processed the scene of the shooting.

A gun residue report was important to both the state and the defense on Thursday. The forensic witness said gun residue can appear on both the victim and the shooter if they're in close proximity.

Stewart is a Durham police investigator and has been on the force since 2007. He testified on Tuesday that during the stop a struggle ensued when Riley revved up his engine and started to drive away.

He told the court he was hanging on for his life when Riley then allegedly shot Stewart in the thigh with Stewart's gun and fled the scene.

A lawyer for Riley told ABC11 shortly after the incident that the police officer was dressed in plain clothes, was driving an unmarked vehicle, and shot himself in the leg during an altercation with Riley after trying to pull him over.

Authorities said Stewart's .45-caliber Smith and Wesson semi-automatic handgun was missing after the shooting. However; his badge, which had been missing, was recovered.

The two other men - Ledarius Devon Riley, and Dustin McCoy Portee, - were both arrested after the incident and charged with being an accessory after the fact to a felony.

In court Monday during opening statements, Assistant District Attorney Stormy Ellis said evidence during the course of the trial would show that Stewart pulled over Riley's vehicle to give him a warning for "fishtailing down Forest Road."

But instead the incident left "Stewart on the ground facing every officer's greatest nightmare."

Defense attorney Alex Charns told the jury that Riley was scared for his life and didn't pull the trigger of the gun.

He said when Stewart pulled Riley over, he strayed from police department policy and didn't call the traffic stop in, and that evidence would show that the year before the incident Stewart, who is black, stopped black motorists 76 percent of the time, according to Charns.

Charns went on to say that after Riley handed over his license and registration the investigator asked him to get out of the car and patted him down. After the frisk, the officer then said allegedly wanted to search the car and after being refused pulled out his gun according.

Riley pleaded guilty to possession of a firearm by a felon in federal court in February 2014 and was sentenced to 10 years, according to prosecutors Monday.