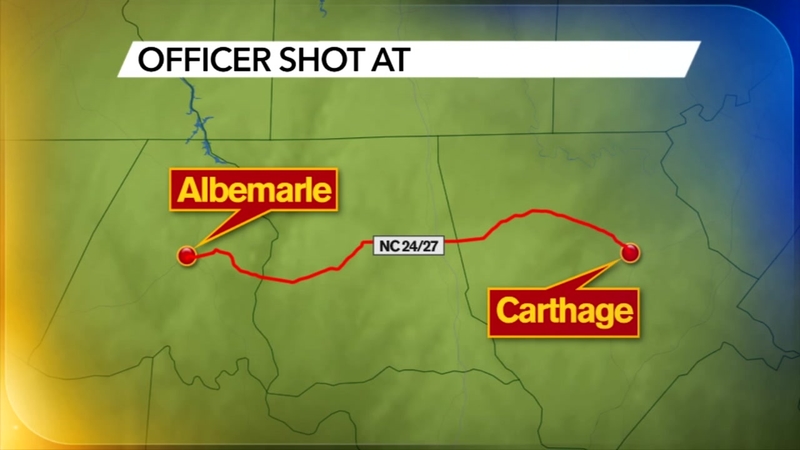 Around noon on Sunday, officers were called to a possible shooting on T.E. White Drive near Elizabeth Avenue. When they got there, they received information about the incident.

Deputies and law enforcement officers searched on foot, by helicopter and drone and with a Richmond County Sheriff's Office bloodhound but were unable to locate the suspects

The suspects were tracked from NC Highway 24, where they abandoned their car, to a location on the Bethlehem Church Road where deputies found dropped evidence.

At this time, deputies believe the two suspects have been picked up and transported our of the area.

In a release from Albemarle police, it's stated that someone driving a black Lexus shot at a 2002 gold Chevy truck, and when an officer found the black Lexus on NC 24 27 near Taco Bell, a person stood up through the sunroof and began shooting at his car.

The shooting damaged the radiator, making the officer's car inoperable, and allowed the suspects to flee the scene.

Additionally, a stray bullet hit a random driver of a passing vehicle, causing non-life-threatening injuries to the driver.

According to witnesses near the incident, the person shooting from the black Lexus was described as a black male wearing dreads.
After the two suspects fled, they were seen traveling through Montgomery County and were pursued by officers from the Biscoe Police Department into Moore County.

The suspects abandoned their vehicle a few hundred yards before reaching a road block that was being set up by Moore County deputies and fled on foot into a wooded area south of NC Highway 24 approximately 3 miles west of Carthage.

The suspects shot at officers yet again, and left behind a shotgun and an AK-47, which were both recovered by deputies.

Residents in the Carthage area are still encouraged to report suspicious activity by calling 911.

The Moore County Sheriff's Office will continue to assist the Albemarle Police Department in this investigation.