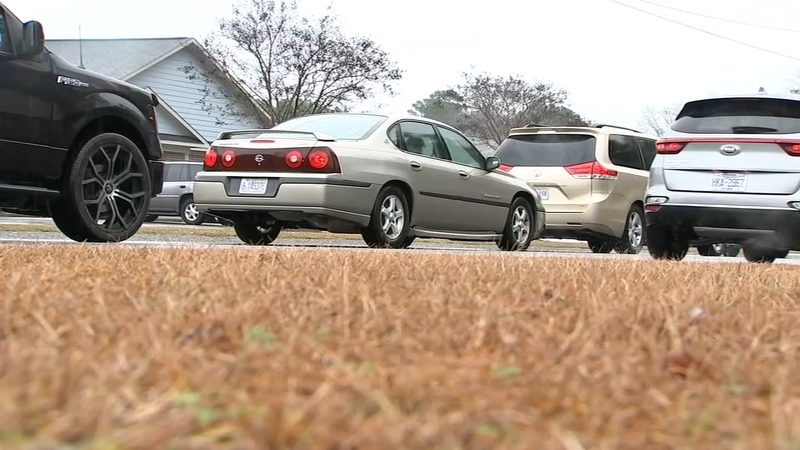 The long lines form along Southern Avenue as early as 6 a.m. for testing that begins at 7:30 a.m. and residents living there have had enough.

"Really angry because I think they could have a better situation as far as how they handle business," said Cassandra McGregor.

Garage door footage shows why McGregor and her husband Vincent can't properly pull out their driveway. The Raeford resident said the line outside Goshen Medical is made up of drivers waiting to be tested for COVID-19.

"It's becoming an issue with the traffic on our street. It's blocking down to one lane. People can't get past. There's been several times there's almost been an accident with people trying to turn around and others flying down the road. They are literally making a line in the street and not pulling over to the side," said McGregor.

At 5:30: Long lines at a COVID-19 test site is causing frustration in one Raeford community. Residents say there’s traffic and drivers waiting in line are blocking them in their driveways along the two-lane road. I’m told little has been done to solve the problem. #abc11 pic.twitter.com/nE1oC1OOXR

She's talked to businesses along the two lane road, including her dentist across the street and even they say it's a problem. A pediatric doctor's office diagonal to her home put a "do not block" sign up.

ABC11 cameras were rolling as cars turning onto Southern Avenue were forced to drive on the opposite side of the road because cars in line for COVID-19 testing were waiting on the wrong side of the street.

Despite constant complaints, nothing has been done.

"My husband contacted the city mayor of Raeford, the medical facility and they sent out a safety inspector. We got signs but it's not helping the problem," said McGregor.

ABC11 called Goshen Medical to get answers and spoke to the Chief Operating Officer, who said the federally qualified health center has been COVID-19 testing since May of last year. The company put this signage up in November asking drivers not to block the McGregor's driveway.

After ABC11 spoke to Goshen, a staffer put eight cones up in the McGregor's front yard.

McGregor agrees COVID-19 testing is necessary, but says it shouldn't' inconvenience her and her neighbors.

"We understand why they're doing it. At the same time, they need to find a better way," said McGregor.