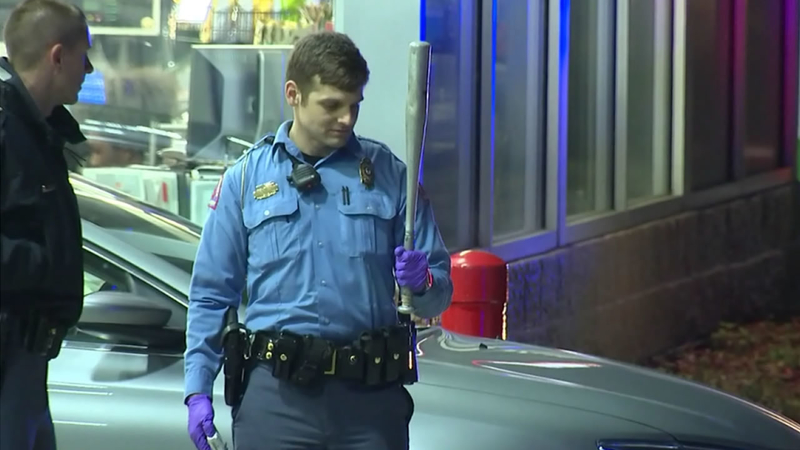 RALEIGH, North Carolina (WTVD) -- A robbery suspect got more than he bargained for when he tried to rob a Raleigh gas station early Tuesday morning.

Around 12:30 a.m., authorities said they were called about a wild encounter between the suspect and a determined clerk at the Circle K in the 2500 block of South Saunders Street.

Winston left, but the clerk went after him in the parking lot with a baseball bat.

The clerk reportedly hit Winston in the head and held him until police arrived.

The suspect was taken to WakeMed in stable condition and later released to police. The clerk was not injured and called 911 to report the incident.

In the 911 call, the victim said he locked himself in the bathroom, hiding from the suspect while he called 911.

Police said that the suspect took off with cigarettes and money, and he will be charged with common law robbery.

There were cameras at the gas station, but officials are waiting on the store's manager to find out if the cameras were working.

ABC11 has decided to slowly reduce the number of stories on the website that have a comments section. We believe very strongly that our audience should have an opportunity to discuss and debate events in our world, however, we have not been able to moderate the comments as well as we would like. Instead of hosting a platform that could allow a few loud and ugly voices to dominate a conversation, we want to encourage everyone to join us on our social media platforms and speak out there. Facebook: facebook.com/ABC11 Twitter: twitter.com/ABC11_WTVD
Report a correction or typo
Related topics:
raleighrobbery
Copyright © 2022 WTVD-TV. All Rights Reserved.
TOP STORIES
Beto O'Rourke confronts Texas gov. at Uvalde shooting press conference
LIVE: TX school shooting leaves at least 19 children, 2 adults dead
Will Congress act on guns after Sandy Hook, Buffalo, Uvalde?
NC Republicans seek to pass 'Parents' Bill of Rights'
Body of missing man found after being swept away in Cape Fear River
Texas school shooter bought 2 rifles within days of turning 18
Biden to sign policing order on anniversary of Floyd's death
Show More
Uvalde school shooting: What we know about 19 kids, 2 teachers killed
92-year-old Raleigh restaurant reopens after long shutdown
California moves toward allowing lawsuits over illegal guns
Death toll rises to 21, mostly children, in TX school shooting
Staffing shortages continue to plague Triangle hospitality industry
More TOP STORIES News