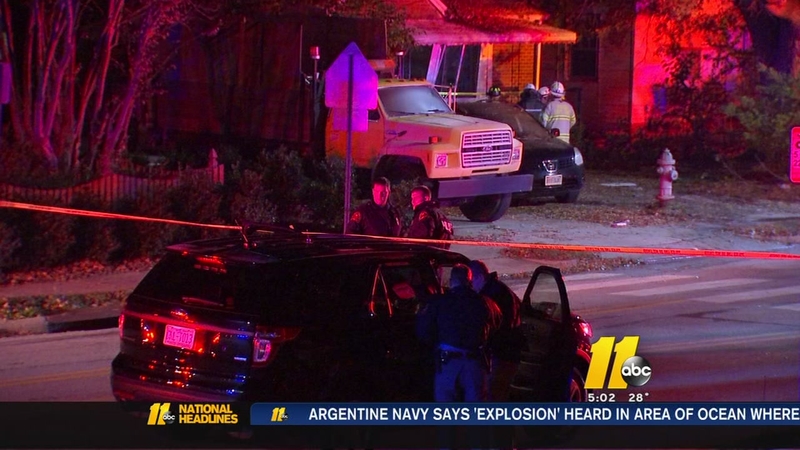 It started just after midnight when authorities said a Raleigh police officer was passed by the vehicle that was speeding westbound on Martin Luther King Jr Blvd.

Authorities said per RPD departmental policy, the officer stopped his attempt to pull over the vehicle.

Moments later, the vehicle failed to stop at a stop sign at State Street and Lenoir Street and struck the home at 805 E. Lenoir St.

As a result of the crash, 42-year-old Anthony Joseph Gaines was pronounced deceased at the scene.

"A large bang. I thought it was something in the house but it wasn't," neighbor Andre Montgomery said. "I ran outside and I saw this car right here crash into the house right there."

"So sad, so sad," Montgomery added. "It could have been here. I feel so bad about the guy that passed away and his family and the kids especially on Thanksgiving. Nobody deserves that. It's just nonsense."

There were two kids inside the home at the time of the crash. They were taken to WakeMed with minor injuries and have since been released.

No RPD officers were involved in the crash.

The driver, 19-year-old Etgar Edva Bautista-Montoya, was arrested at the scene and charged with DWI and felony death by motor vehicle.

"He's where he's supposed to be," Montgomery said about the driver. "If you want to be driving under the influence you got to take into account everybody else who's out here."

A Raleigh teen heading to court this afternoon after being accused of killing a Marine veteran. Police say the teen was going 65 mph when he slammed into this home. Court record show he had a BAC of .12 at the time #abc11 pic.twitter.com/pp5R6SMWIj

Police said two other juveniles were inside Bautista-Montoya's vehicle at the time of the crash. All of them were treated by EMS at the scene for minor injuries.