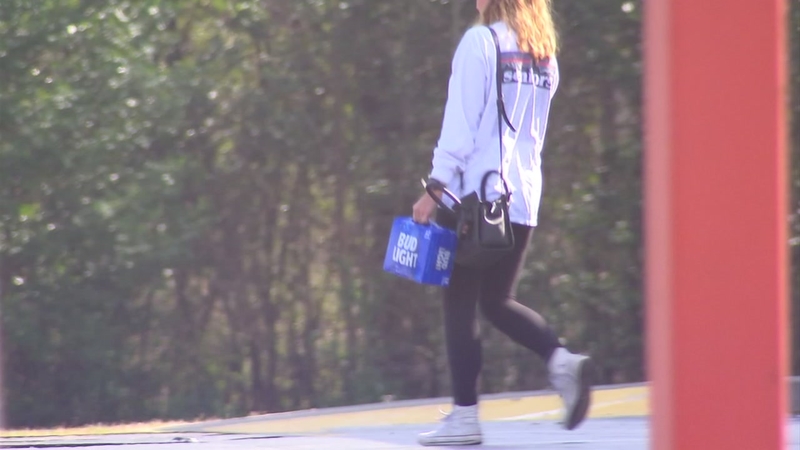 CUMBERLAND COUNTY, N.C. (WTVD) -- Local law enforcement is on alert after finding that clerks, bartenders and servers are not asking for identification as often as they should.

"We went into an establishment a couple weeks ago and found five minors in there drinking," said ABC Agent Douglas Austin.

Austin said when you think of the Alcoholic Beverage Control, the ABC store likely comes to mind.

While they do regular beer and liquor sales, what you may not realize is that they are under the Department of Public Safety.

That means their agents can cite and make arrests for alcohol-related crimes.

Only our cameras were invited along for an undercover sting as ABC agents sent a minor, armed with her actual ID, into unsuspecting stores to purchase alcohol.

The minors are instructed to dress normally.

"So with the college kids, the high school kids, we tell them 'If you have a school shirt. Wear it. Because this is just a gut check. We don't want any trickery,'" said Austin.

The minor was sent into several stores near Wade. The first two, she came out with nothing. The third time was the charm.

"She was able to get a four pack of 8-ounce Bud Light," said Austin.

The minor told ABC11 that the clerk didn't check her ID.

"Went up to the cashier and I was waiting for her to check my ID or ask how old I was and she didn't ask me. She told me how much it was and let me leave," the minor said.

Agent Austin went in to talk to the clerk and give them a citation.

The next few stops would come up short, no sale. That's what our crew was anticipating to happen at a store off of NC-24.

That was where a Cumberland County Sheriff's Office transport vehicle was parked outside. One deputy was already inside making a purchase.

The minor still left the store with alcohol.

"I went up to the register. And I guess the lady just started the shift. And she said 'next customer'. There was actually a cop in the next lane which made me a little nervous," she told ABC11.

"In this case, the sale went through. We have a copy of the receipt that says the age was verified, so some date of birth was entered that was not the date of birth on our minor's ID," said Austin.

The sting netted a 33 percent illegal sale rate which is pretty consistent with past stings.

The price that violators pay may be a citation or a fine but ABC agents say the cost to public safety could prove deadly if a minor gets behind the wheel or over drinks as a result of being sold alcohol.

Next, the ABC Commission is going after bars.

"We're also concerned with the minors selling to intoxicated subjects. If you have someone that's in a bar or a gas station that's already inebriated and you're giving them more alcohol... what's the ripple to that? So we're always looking for those too. Those are the ones that impact public safety," said Austin.
Report a correction or typo
Related topics:
cumberland countyexclusiveliquorunderage drinkingbeeralcohol
Copyright © 2021 WTVD-TV. All Rights Reserved.
TOP STORIES
RPD chief hopes 'Shop with a Cop Day' helps community relations
CNN fires Chris Cuomo following suspension, investigation
Friends mourn loss of Rolesville teen killed in hit and run
Passenger jumps out of plane taxiing at Phoenix airport
Parents charged in school shooting arrested, plead not guilty
Homeowners burn down house in attempt to get rid of snakes
Show More
Pedestrian killed on US 401 identified as Rolesville HS student
Tensions between US, Russia escalate ahead of Biden-Putin call
Money found inside megachurch walls possibly tied to 2014 theft
COVID-19 metrics climb after Thanksgiving but still far below 2020
Contact tracing revs up as omicron cases detected in several US states
More TOP STORIES News