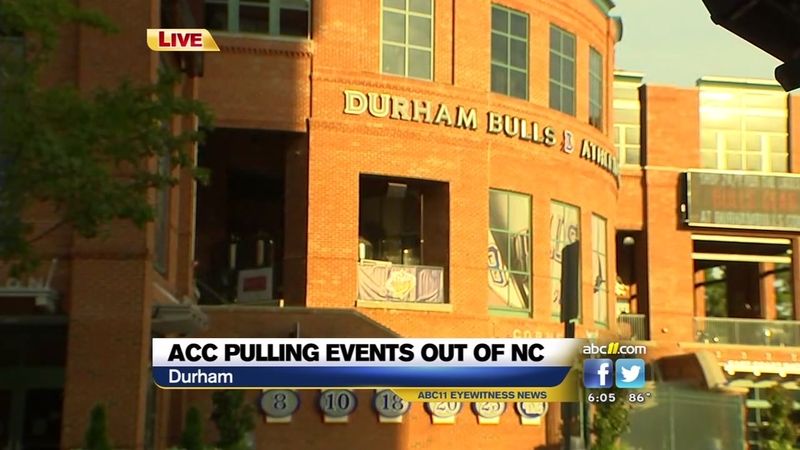 ACC pulling events out of NC over HB2

GREENSBORO (WTVD) -- The Atlantic Coast Conference has followed the NCAA's lead and is removing all its athletic championships from North Carolina over a state law that some say can lead to discrimination against LGBT people.

The ACC Council of Presidents voted Wednesday to relocate the league's championships until North Carolina repeals the law. The decision includes all championship this academic school year, which means relocating the ACC football title game that was scheduled to be played in Charlotte in December.

"The ACC Council of Presidents made it clear that the core values of this league are of the utmost importance, and the opposition to any form of discrimination is paramount," ACC Commissioner John Swofford said in a statement. "Today's decision is one of principle, and while this decision is the right one, we recognize there will be individuals and communities that are supportive of our values as well as our championship sites that will be negatively affected. Hopefully, there will be opportunities beyond 2016-17 for North Carolina neutral sites to be awarded championships."

The neutral site championships that will need to be relocated are as follows:

READ MORE: McCrory responds to NCAA decision to move events out of NC

On Wednesday afternoon, Gov. Pat McCrory reacted to the ACC's announcement with a statement that echoed his response to the NCAA's earlier decision to pull championship events out of the Tar Heel State.

"The issue of redefining gender and basic norms of privacy will be resolved in the near future in the United States court system for not only North Carolina, but the entire nation," McCrory said in the statement. "I strongly encourage all public and private institutions to both respect and allow our nation's judicial system to proceed without economic threats or political retaliation toward the 22 states that are currently challenging government overreach."

The ACC's decision was also met with support and opposition Wednesday from other groups and individuals. Some responses are listed below.

We appreciate the Council of Presidents' reaffirmation of the ACC's strong commitment to diversity and inclusion, as well as the decision to keep ACC championship contests on our campuses. However, we regret today's decision will negatively affect many North Carolinians, especially in the affected host communities.

UNC-Chapel Hill and NC State remain steadfast in our commitment to welcoming and supporting all people. Our policies protect students, faculty and staff from discrimination, regardless of age, color, disability, gender identity, genetic information, national origin, race, religion, sex, sexual orientation or veteran status. As such, we remain dedicated to providing and promoting equal opportunity and non-discrimination to everyone who participates in athletic events on our campuses.

Shelly Green, president and CEO of the Durham Convention and Visitors Bureau

I am disappointed by the ACC's decision but understand their position and the need to do what they feel is right. I regret the impact this will have on many hard working individuals in Durham who have been, and remain committed to ensuring the success of the ACC Baseball Championships. I also appreciate the recognition by Commissioner Swofford that although they are standing on principle on this decision, they recognize that many individuals and communities in North Carolina are already supportive of their values. Durham certainly is, and we hope this will help us regain the tournament at a future date.

I can only hope that these decisions made by the ACC and NCAA, as well as countless other businesses and organizations, will motivate a speedy resolution of this issue either legislatively or through the judiciary.

It is very unfortunate that the NCAA and ACC have decided to move their scheduled events out of North Carolina. No one ever wants to lose events under any circumstances, but these organizations are certainly entitled to host their events wherever they choose. The truth remains that this law was never about and does not promote discrimination. We will continue to advocate that North Carolina is a great place to live, do business, hold events and to visit.

"This is another loss for North Carolina that could have been easily avoided - another disappointing day for the state. How much more money and how many more jobs does North Carolina have to lose before Governor McCrory stops pointing fingers and fixes his mistake? It is way past time to repeal this disastrous law." - North Carolina Democratic Party Executive Director Kimberly Reynolds

Our partners at the Atlantic Coast Conference had a difficult decision to make regarding the location of neutral site championships throughout the state of North Carolina. We understand the conference's position, and support our partner's decision to remove those championships from North Carolina. We look forward to a resolution of this issue, so that we can welcome the tournament back to Durham in future years.

We have opposed House Bill 2 from the beginning, and continue to share that sentiment.

This is political theatre by the NCAA and ACC. If these multi-million dollar, tax exempt organizations were interested in social change and not making a political statement, they would proceed with their marquee events in North Carolina and enact any transgender bathroom policy they wanted. This blatant political move-less than two months before the election-brings into question their tax exempt status. This is an avenue we intend to explore.

We appreciate that the ACC shares our commitment to creating an inclusive atmosphere for all, but we regret that today's decision will penalize affected host communities and fans throughout the state. Intercollegiate sports and the ACC are integral parts of North Carolina's economy and way of life.

As we have said many times, UNC institutions do not discriminate on the basis of sex, sexual orientation or gender identity, and we are fully committed to being open and welcoming to individuals of all backgrounds. We remain caught in the middle of this issue and welcome a speedy resolution by the court.