HB2 compromise could be near, group says 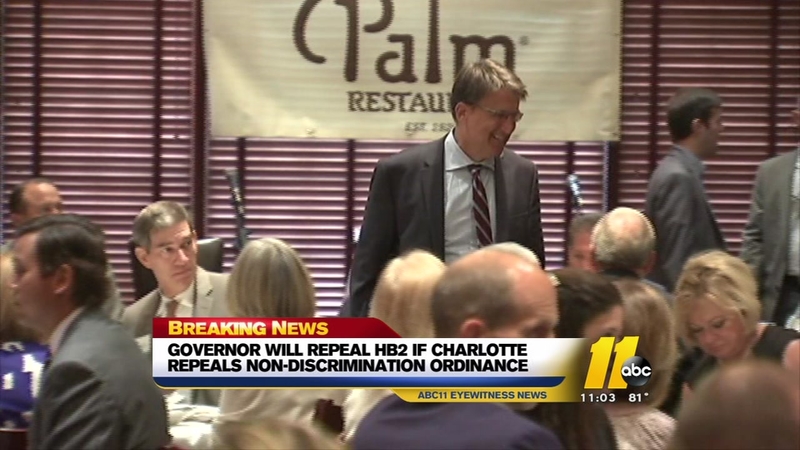 HB2 could be repealed if Charlotte acts first

RALEIGH (WTVD) -- In the fight about House Bill 2, the North Carolina Restaurant and Lodging Association says top lawmakers are considering a compromise.

The organization says the Legislature is prepared to meet in a special session as early as next week -- if Charlotte repeals its controversial bathroom ordinance that sparked the issue to begin with.

"The unintended consequences of Charlotte City Ordinance #7056 and House Bill 2 have taken a considerable toll on our state as a whole," the association said in a media release. "The hospitality industry has become collateral damage in a fight it did not start or ask for. Restaurant and lodging businesses and their employees are suffering the adverse impact of these policies though lost business and wages."

The association also urged policy makers to work quickly to find a solution.

"NCRLA has received assurances this week from legislative leadership, that if the Charlotte City Council repeals Ordinance #7056 at their meeting on Monday, the General Assembly is prepared to meet in special session as early as next week to repeal House Bill 2," said Lynn Minges, NCRLA president and CEO. "Furthermore, Governor Pat McCrory has assured NCRLA that he is willing to call legislators into a special session next week for this purpose if both the city and legislators have the votes for repeal."

State Rep. Chris Sgro, D-Guilford, said Charlotte isn't to blame for the economic losses the state has endured since HB2 was enacted.

"We can't afford more antics from Pat McCrory, Phil Berger, and Tim Moore. They are the ones who got us in this situation in the first place and are costing our state millions," said Sgro, who is also executive director of Equality North Carolina. "Hundreds of other cities across the nation already had in place a similar ordinance to Charlotte's.

"While important to the LGBT community, it was not unique. What is unique and dangerous is HB2. It's HB2 that cost us the NCAA, ACC, and the NBA. It's HB2 that's causing us economic harm, and it's HB2 that needs to be repealed. Enough games and blame - repeal HB2," Sgro added.

McCrory's office responded with the same assertion the governor made from the onset of the special session that created HB2.

"For the last nine months, the governor has consistently said state legislation is only needed if the Charlotte ordinance remains in place," said Josh Ellis, Director of Communications for McCrory. "If the Charlotte City Council totally repeals the ordinance and then we can confirm there is support to repeal among the majority of state lawmakers in the House and Senate, the governor will call a special session. It is the governor's understanding that legislative leaders and the lieutenant governor agree with that assessment."