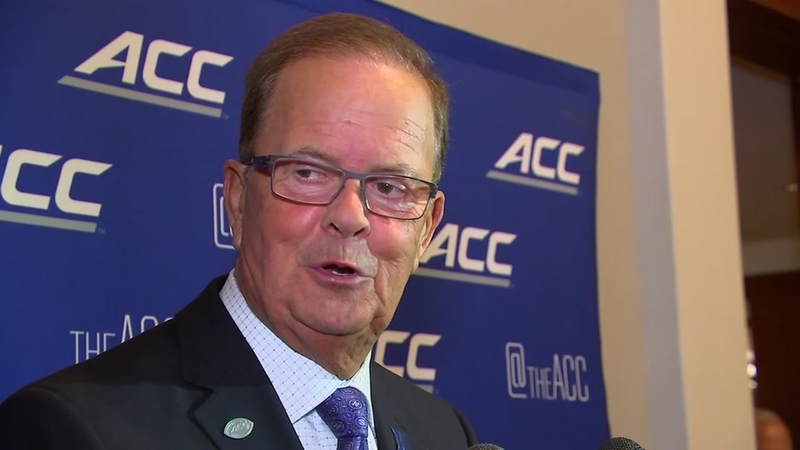 CHARLOTTE, N.C. (WTVD) -- Duke doesn't just jump into the deep end of the pool to start the season, the Devils leap into the Bering Sea vs. Alabama. Sure, the Crimson Tide is no Clemson, but they'll put David Cutcliffe's group to the sternest stress test on August 31 in Atlanta.

Cut's no shrinking violet though. He talked Thursday about his confidence in his "process" of preparing a team through fall camp and sounded confident that his group will show up that first Saturday and perform very well.

A large part of that performance will, of course, depend on the play of new starting QB Quentin Harris. Harris has traveled that least likely of paths to the job, apprenticing for four years before finally getting his shot.

Most players would've transferred out long ago, but not Quentin. When he said at ACC Kickoff that he chose Duke for its combination of athletics and academics it was easy to believe him.

As his coach confirmed, Harris is "brilliant" both in real life and in a football sense. He's wanted to start, don't get it wrong, but the notion of leaving because he hadn't yet won the starting job just wasn't a consideration. Long before this season, Harris has cemented himself as a leader on the Duke team.

Harris spoke extensively about the playmakers that'll be surrounding him this year. While Duke turns over a ton of its offensive unit from last season, he thinks the receiver position will take a big step forward based strictly on the size of the guys in that unit.

No disrespect to diminutive guys like TJ Rahming, but this year's wideouts, Harris said, give him the option of throwing the ball up knowing his target can win a 1-on-1 battle to highpoint the ball.

Maybe the most striking thing David Cutcliffe said Thursday -- he believes this year's defense is the deepest and potentially best defense he's ever fielded at Duke. That's even with the departure of Joe Giles-Harris and Ben Humphreys. That's saying something.