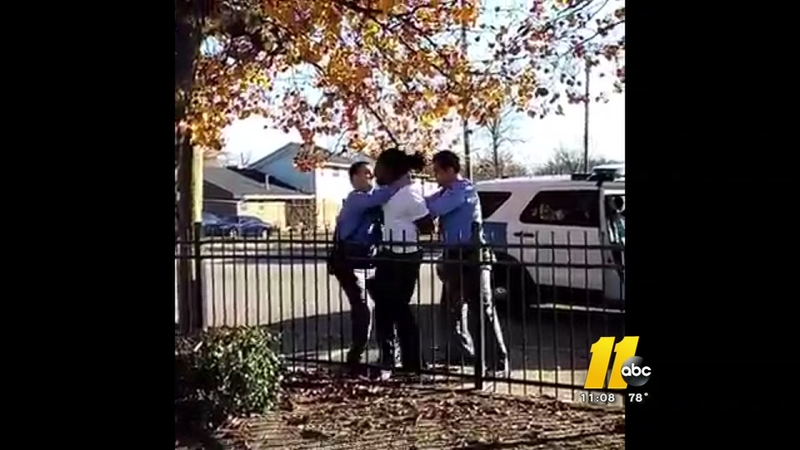 RALEIGH (WTVD) -- Community activists in Raleigh are taking their fight to the federal level.

“Rashon is one of thousands of men in Wake County who are falsely accused.” Tonight the continued fight for one raleigh man after he alleges @raleighpolice used excessive force on him back in 2016. We have both sides to the story on #ABC11 pic.twitter.com/LVxxQD7XIz

The legal fight began in 2016 after Rashon McNeil was arrested and charged with resisting and obstructing an officer.

Afterward, a video emerged of McNeil being wrestled to the ground by two Raleigh police officers.

“We must be an equal player at the table.” Tonight local activists say even if their #doj comes up empty, they plan to continue to fight on a policy level locally for men like rashon McNeil. The video from his arrest in 2016 is on our news at 11 #ABC11 pic.twitter.com/eInjXLPSEV

Raleigh police dismissed its internal affairs probe in March, but McNeil and other advocates hope to bring some kind of resolution the case.

"We can't allow American police officers to continue this behavior and call it justice," said Kimberly Muktarian, president of Save Our Sons of Raleigh. "Rashon is one of thousands of young men in Wake County who are falsely accused and their cases are dismissed."

McNeil is no stranger to authorities; he served six years for armed robbery with a dangerous weapon.

Court records show other charges on his record as well.

However, McNeil said if he was held accountable for his actions, then so should Raleigh police.

"I just believe that I'm pushing for the right thing," he said. "An unjust act cannot go without justice. I just want people to know I'm not a statistic."

Activists said even if the DOJ investigation comes back empty, they'll continue to fight for policy change locally including pushing for a citizens advisory board to oversee law enforcement.