After 90 days of hunger strike, jailed filmmaker, activist says: 'The end is near' 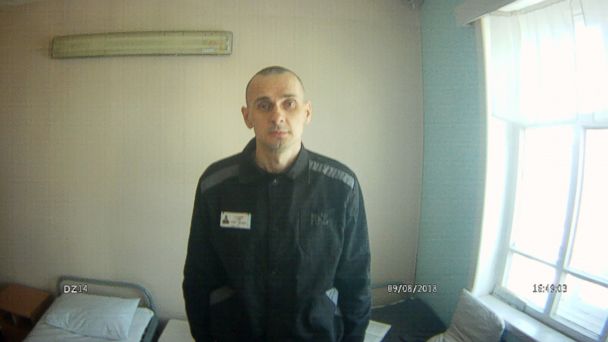 Oleg Sentsov has not eaten for 90 days.

For nearly three months, the Ukrainian film director has been on a hunger strike in a remote Russian prison, where advocates say he is being held as a political prisoner.

Sentsov, 42, was arrested in 2014 when Russian seized his native Crimea from Ukraine. He was sentenced to 20 years in prison on terrorism charges in a trial that Amnesty International condemned as "Stalinist."

He was then sent to a high-security prison colony in Russia's far north inside the Arctic Circle.

On May 14, Sentsov declared a hunger strike, demanding the release of approximately 70 Ukrainian political prisoners currently held in Russia.

Since then, he has refused food, receiving only glucose and vitamin supplements. His lawyer, Dmitry Dinze, visited him on Tuesday and said Sentsov had lost 66 pounds and his heart rate had slowed to just 40 beats a minute.

Sentsov's cousin on Thursday said she had received a letter from him in which he said he could now barely stand up and that he had written: "The end is near."

"Things are not just bad, they are catastrophically bad," the cousin, Natalya Kaplan, wrote in a post on Facebook.

Ukraine's rights ombudswoman, Lyudmila Denisova, released photos of Senstov Thursday she said she had received from her Russian counterpart. In the photos, Sentsov looks gaunt and weak, noticeably reduced from the 220 pounds he weighed when he entered prison.

Russia's prison service in a statement on Tuesday said that Sentsov's condition was "satisfactory."

Dinze told AFP he did not agree, saying his state was "bad." The lawyer added that Sentsov was prepared to die.

"He is ready to fight for his position to the end, yes," he said.

When Russian invaded Crimea four years ago, Sentsov was a successful filmmaker, best known for his 2011 film "Gamer." A member of an activist group, he opposed the annexation vocally, taking part in demonstrations and passing food to Ukrainian soldiers trapped in their bases by Russian troops.

Two weeks after the takeover, officers from Russia's FSB security service seized him. According to Sentsov's account, he was tortured, suffocated with a plastic bag and threatened with rape.

Amnesty International described Sentsov's trial as a "Stalinist show trial," involving invented charges and confessions produced through torture. A military court convicted him of arranging for the doors of the office of the local branch of a pro-Russian party to be set on fire and of plotting to blow up a statue of Lenin.

Prosecutors were unable to present any evidence tying Sentsov to the plot and a key witness withdrew his confession, saying he had been tortured into making it. Still, Sentsov was convicted of terrorism.

He has been serving his sentence at the prison colony in Labytnangi on in the Yamal region, where the climate is brutally cold and which is located more than 3,000 miles from Crimea, where his two young children live.

"They wanted Senstov to be an example," said Tanya Lokshina, a senior researcher at Human Rights Watch. "He got 20 years for a crime he did not commit."

Sentsov's case has attracted international attention, with calls from politicians and film celebrities calling for him to be released, among them Johnny Depp, the novelist Stephen King and the director Pedro Almodóvar.

But the Kremlin has so far shown little sign of relenting and the effort to free Sentsov has become increasingly urgent. Others have died on shorter hunger strikes.

The Irish Republican Bobby Sands, for example, died in 1981 after 66 days. And during the Soviet Union, the dissident Anatoly Marchenko died after 117-day strike, having endured forced feeding.

There had been hopes during the soccer World Cup that the heightened international scrutiny might be used to push the Kremlin into showing leniency. But the tournament passed with no change.

The Kremlin has said Sentsov must submit an application himself for a presidential pardon. He has previously refused to ask for leniency or for his own release on the grounds he does not recognize his detention as legitimate.

He considers himself a Ukrainian citizen illegally tried as a Russian.

Last month, Sentsov's mother asked Russia President Vladimir Putin to pardon her son. On Wednesday, Putin's spokesman, Dmitry Peskov, said the pardon request had been received but that it would have to be examined.

On Friday, there was a renewed push by France's president Emmanuel Macron, who called Putin to raise Sentsov's case. But following the call, the Kremlin's readout made no mention of him, saying only the two had discussed Syria and "some other things."

"The clock is ticking very loudly," said Lokshina. "With regards to the international community, it's not for lack of trying. But somehow the Kremlin doesn't move."

The European Court of Human Rights has ordered Russia to transfer Sentsov to a public hospital close to Crimea and provide him with appropriate medical care while urging him to halt his strike. Sentsov has refused to be moved, however, saying he won't survive the journey.