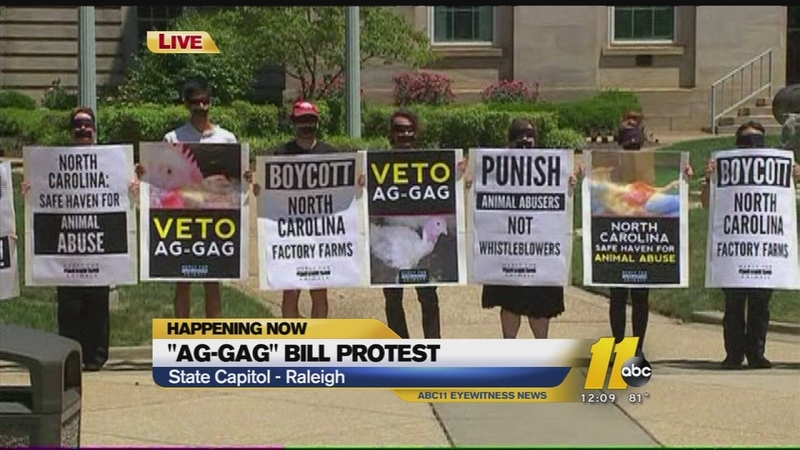 RALEIGH (WTVD) -- A group of about 50 protestors gathered outside Governor Pat McCrory's office Wednesday to urge him to veto North Carolina House Bill 405 - also known as the "Ag-Gag" bill.

The North Carolina Senate passed the bill Monday night which allows business owners to sue employees who secretly record audio or video in the workplace. The measure already passed in the House.

Secret recordings have been repeatedly used in the state by animal rights groups to expose mistreatment. Some of the investigations have led to criminal charges.

Supporters say it's needed to protect against employment fraud. Critics say it puts business's right to privacy above the public's right to know.

"This bill is designed to shield animal abusers from public scrutiny and it punishes people who expose cruelty to farm animals and it threatens consumer's' right to know where their food comes from, it's dangerous and un-American," offered Mikael Nielsen with the group Mercy For Animals - which has used secret recordings.

The bill doesn't just apply to farms. It also applies to other businesses like restaurants and daycares.

Supporters ABC11 has talked to in the past agree with that protection - in that it would prevent people from taking and displaying images of something taken out of context.

The protestors Wednesday held signs while blindfolded with their mouths covered with hopes the Governor will side with them on the issue.

The Governor's office said he is still reviewing the bill.