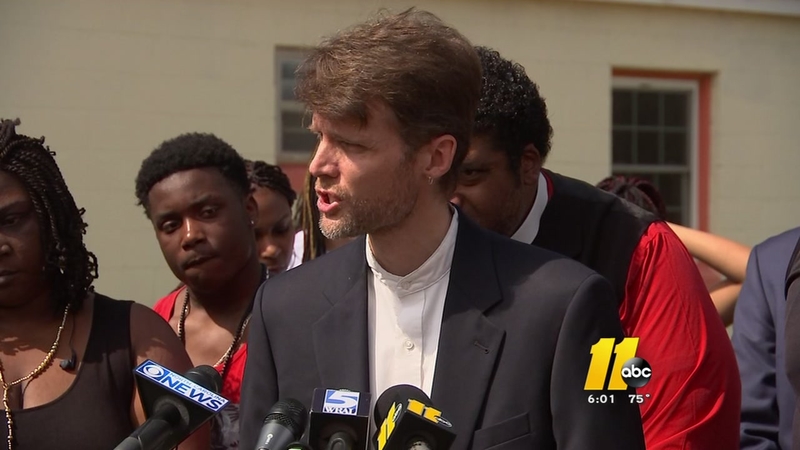 RALEIGH (WTVD) -- At a press conference Saturday afternoon, a lawyer for the family of Akiel Denkins, the man shot and killed by Raleigh police, said that an autopsy by an independent forensic pathologist said that Denkins was shot in the back.

Scott Holmes, one of the members of the family's legal team, said the autopsy ruled the shot from the back was near the shoulder area. In addition, he said they held the press conference because the initial report from the state "created an impression that there's shots from the front."

He also asked for eyewitnesses to come forward and asked everyone to "keep an open mind of how this occurred."

"It's not appropriate to rush to conclusions about it," said Holmes.

Rolanda Byrd, Denkins' mother, stood off to the side, surrounded by her family and Dr. William Barber from NAACP, as Holmes and her other lawyers spoke. She called for transparency during the ongoing investigation.

Byrd's 24-year-old son, Akiel Denkins, was killed by a Raleigh police officer on Feb. 29. Denkins was shot four times during a struggle after a foot chase in the downtown area, according to police and a preliminary autopsy report.

Denkins was shot by Senior Officer D.C. Twiddy in the chest, both arms and right shoulder, according to a preliminary autopsy report. But, the report did not specify whether the shots came from the front or back.

Byrd has said her son was shot in the back while running away from police near Bragg and East streets.

Raleigh's police union has said Officer Twiddy fired in self-defense. In a statement to ABC11, the union said "on Monday, officer Twiddy had to do the hardest thing that is sometimes required as a police officer... We believe that officers don't leave their rights at home when they put on their uniform... Police officers have the right to self-defense."