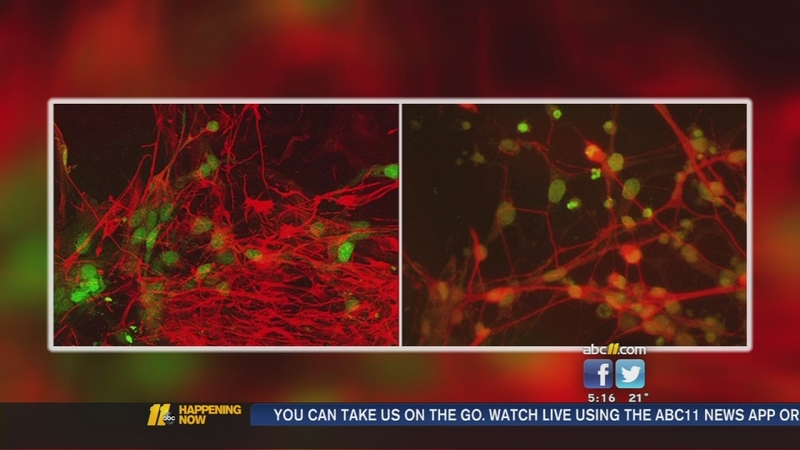 DURHAM (WTVD) -- A new study conducted by Columbia University Medical Center was unveiled Thursday in the Journal of Science sharing an exciting discovery about ALS, otherwise known as Lou Gehrig's Disease. Some of the research was done at Duke, and is exciting to a world-renowned expert there who hopes this and other recent discoveries could one day lead to a cure.

Dr. Richard Bedlack is the Director of the Duke ALS Clinic in Durham. That clinic was one of 20 worldwide to participate in a recent study looking at the genetic coding of ALS patients.

"We did find something very important. We found a new gene that can cause ALS. It's called TBK-1," Dr. Bedlack explained.

He added this discovery brings them one step closer to developing drugs that could potentially help treat the disease.

"It actually highlights a pathway we thought might be important, but up until now, we didn't put a lot of energy into manipulating that pathway with drugs," said Bedlack.

Meanwhile, Dr. Bedlack is exploring another avenue, one that involves a very rare sub-group of ALS patients.

"Something a lot of people don't know is that every once in a while a person gets ALS and instead of getting worse, they actually start getting better," he shared.

As a neurologist and world renowned ALS expert, Dr. Bedlack is spearheading efforts to look at these cases as part of a project titled "ALS Reversals." Some of the money for this is coming from donations made through ice bucket challenges, as well as private donations made directly to the clinic - totaling more than $300,000. Between the recent Columbia University study and Dr. Bedlack's new project, he said he's hopeful the medical community is getting that much closer to a cure.

"It's kind of like chopping down a tree. This is one more blow to the side of the tree. We don't know which one of those blows is going to make that tree topple, but it's possible that this could be the one," said Bedlack.

For more on the Duke ALS Clinic: http://www.dukealsclinic.com/

For more on ALS Reversals: http://www.alsreversals.com/

For more on the ALS Study: http://dig.abclocal.go.com/wtvd/docs/Goldstein_FINAL.pdf